Quite a lot of wannabe Hemingway

From Ed Vulliamy’s The Observer piece about WikiLeaks publishing US State Department cables re the background of the Egyptian — gee, what do we call it? Uprising? Revolution? Riots?

Julian Assange: ‘How do you attack an organisation? You attack its leadership’

Julian Assange … has been up all night disseminating, on his WikiLeaks site, American State Department cables and documents relevant to the events unfolding in Egypt, and they make remarkable reading.

The United States diplomats writing the cables leaked to Assange report many of the reasons for the Egyptian uprising: torture of political dissidents, even common criminals, to obtain confessions; widespread repression and fear; and the increasingly important role of internet activism, opposition blogging and communication with democratic movements via the web.

As ever with the diplomatic memorandums published by WikiLeaks – which has made Assange public enemy number one in the US – the cables are, ironically, testimony to the professionalism and straight-talking of the US State Department. Assange concedes that the cables contain “a relative honesty and directness, and quite a lot of wannabe Hemingway”.

Read the article here at The Observer … and not just for the bitch slaps. This is a fascinating time to be alive and the insights the WikiLeaks HEROES (yes!) are revealing are, on the whole, illuminating.

The ‘rising tide of hostility’ Julian Assange (reportedly) faces smacks of the same smear and ‘decapitation attacks’ that I guess the CIA and its equivalents will be waging against him as head of WikiLeaks.

As for The Guardian reporters who’ve written a book about him, following their collaboration to originally publish the WikiLeaks material (a scoop any way you look at it), well, that’s to be expected. Seeking their 15 minutes of fame. We live in a culture of celebrity. Look how The Guardian demeaned its primary source in these matters: 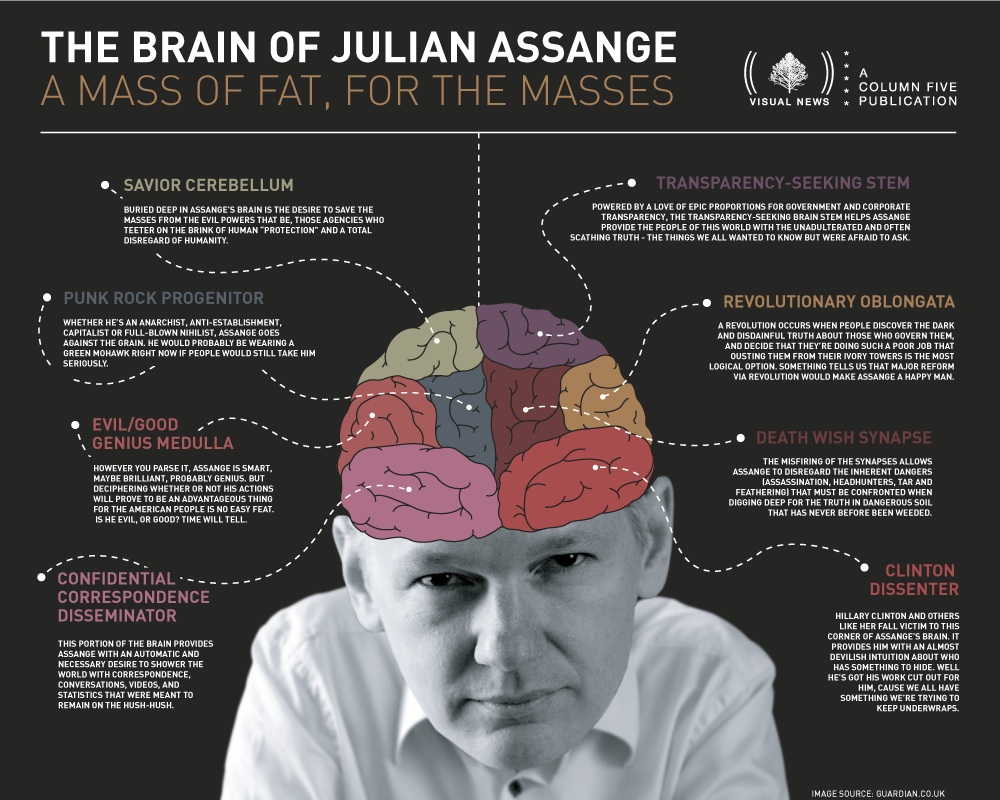 Biting the hand that feeds you. This kind of gutless schizophrenic hero/devil treatment of Julian Assange by his media collaborators annoys me. Cheap shots from weasels trying to prove their independence credentials, in my opinion. (Source: Guardian.co.uk click to enlarge)

According to Vulliamy, Assange sees the book and the Bill Keller piece as attacks. He’s sensitive. I would be too. There’s a nauseating ‘see-we’re-not-in-love-with-WikiLeaks’ stageshow being promulgated by some in the media which stinks to me. A little fishy. It smacks a little too much of FUD. And we know who is good at that, don’t we?
+
UPDATE: Interesting headline on this very same article in the NZ Herald:

Public enemy No 1 faces his accusers

Ooooh. I wonder who tacked that on? It may be syndication…? 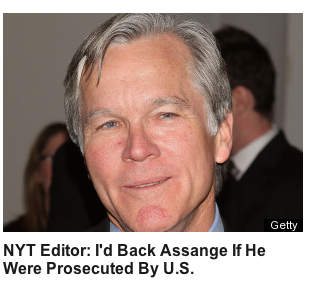 Bill Keller: 'Whatever one thinks of Julian Assange...journalists should feel a sense of alarm at any legal action that intends to punish Assange for doing what journalists do.'— report from the Huffington Post (click)

The editors of The Guardian and the New York Times both said they would back WikiLeaks chief Julian Assange if he were ever prosecuted by the U.S. government. They also said they are thinking of launching WikiLeaks-style operations at their own papers.

The comments from Alan Rusbridger, editor of The Guardian, and Bill Keller, editor of the Times, came at a panel about WikiLeaks on Thursday night. The panel was held at Columbia University. The two discussed their fractious relationship with Assange and the effect that WikiLeaks has had on journalism. Jack Goldsmith, the former Bush administration official, was also on the panel.

Both papers worked with Assange on a series of explosive scoops throughout 2010–until a series of arguments and decisions by the two news outlets led to the severing of their ties with Assange. But they both said they would firmly side with Assange if he were prosecuted. The Justice Department has acknowledged that it is seeking to charge him with violating the Espionage Act of 1917 for publishing secret documents and soliciting them from Bradley Manning, the alleged leaker who is now in jail.

“If, God forbid, ever this came to court, I’d…stand completely shoulder to shoulder with him,” Rusbridger said. “I have great admiration for him [and] respect for a lot of the stuff that he’s done.”

Keller said that he was “not a lawyer,” but that it would be “hard to conceive of a prosecution of Julian Assange that wouldn’t stretch the law to be applicable to us. Whatever one thinks of Julian Assange…journalists should feel a sense of alarm at any legal action that intends to punish Assange for doing what journalists do.”… Read on …