« An insight into sociopaths and liars
AP and plagiarist Shepard Fairey settled. Now going after a common enemy? »

A decent length 60 Minutes interview with Assange. Worth watching.

Still with the ‘oooh Julian Assange is soooo paranoid’ shtick. (What a disrespectful, unrealistic angle, that is.)

And then there’s this ‘not one of us’ arse-covering comment (… an editorial line from CBS? You decide.) : “Some have argued that he’s [Assange] not really a journalist at all. He is an anti-establishment idealoge with conspiratorial views. He believes large government institutions use secrecy to suppress the truth and he distrusts the mainstream media for playing along.”

I don’t blame him. That said, The NY Times’ Bill Keller says if Assange is prosecuted for publishing the leaks, he will, as co-publisher with The Guardian and Der Spiegal stand with him as will The Guardian‘s Alan Rusbridger. They both see him as a journalist, despite CBS’s awkward double-mindedness.*

Discussing Joe Biden’s and Sarah Palin’s calls for Julian Assange to be dealt to as a ‘terrorist’ … ‘renditioned back to the United States to be executed‘.

Interviewer Steve Kroft: As you know we have a First Amendment and people can say whatever they want, including politicians. I don’t think that many people in the United States took seriously the idea that you were a terrorist.

Assange: I would like to believe that. On the other hand, the incitements to murder are a serious issue and unfortunately there is a portion of the population that will believe in them and may carry them out.

Seems a reasonable fear to me.

His comments later re prosecuting a publisher for espionage: “The First Amendment covers the case” are right on, in my opinion. Likewise his defence of Bradley Manning as ‘America’s foremost political prisoner.’

If we’re talking about creating threats to small publishers to stop them publishing, the US has lost its way. It has abrogated its founding traditions. It has thrown the First Amendment in the bin, because publishers must be free to publish. 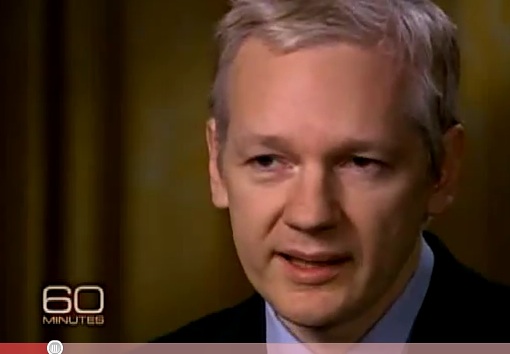 Video from CBS below the fold

View Part 2 at YouTube “We are free press activists.”

* The editors of The Guardian and the New York Times both said they would back WikiLeaks chief Julian Assange if he were ever prosecuted:

“If, God forbid, ever this came to court, I’d…stand completely shoulder to shoulder with him,” [The Guardian’s editor Alan] Rusbridger said. “I have great admiration for him [and] respect for a lot of the stuff that he’s done.”

Keller said that he was “not a lawyer,” but that it would be “hard to conceive of a prosecution of Julian Assange that wouldn’t stretch the law to be applicable to us. Whatever one thinks of Julian Assange…journalists should feel a sense of alarm at any legal action that intends to punish Assange for doing what journalists do.”