« Colbert on Fox’s Steve Doocy: ‘Journalism plus’
Responding to criticism can be tricky »

I’ve entertained questions of my own about former Richmastery (now Property Tutors) mentor and property spruiker Sean Wood’s credibility and marketing methods for some years (see here). Now the Financial Markets Authority’s conclusion that ’15 million dollar man’ Sean Wood is not a person of ‘good character’ for the purposes of the Financial Advisor’s Act (and thus to decline his application to be an Authorised Financial Advisor) has been confirmed on appeal to the Wellington District Court.

“Mr Wood’s failure to disclose convictions and, more importantly, the fact of his conduct behind the convictions and his attitude to compliance with the law, mean that he is not of good character such as is required to be an AFA [Authorised Financial Advisor]. 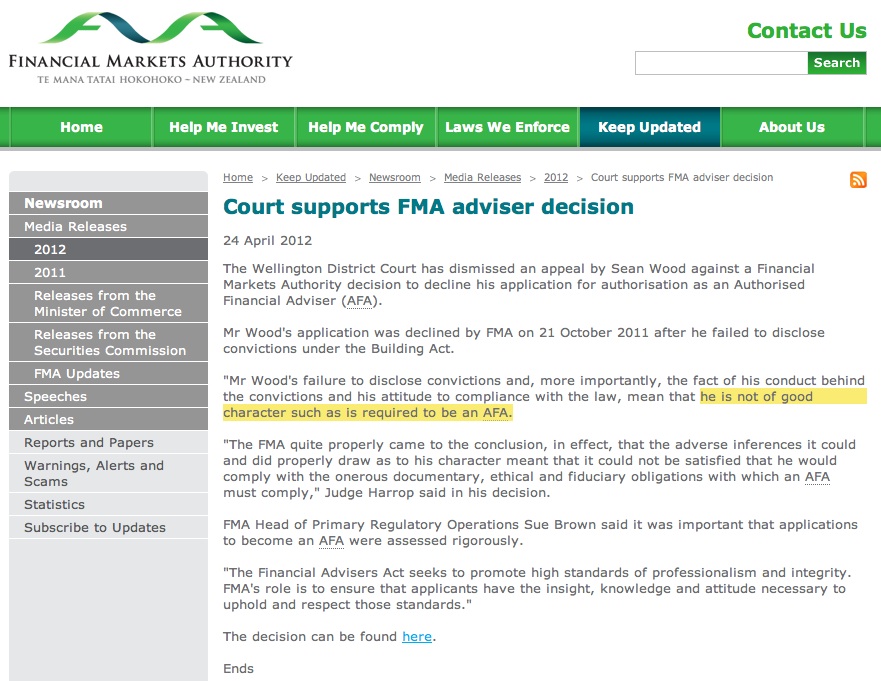 FMA says Sean Wood 'is not of good character'. (Click to read this at the FMA site.)

Being the first case of its kind, Sean Wood’s rejection by the Financial Markets Authority as unsuitable to be an Authorised Financial Advisor, his appeal against the FMA decision — resulting in a District Court Judge (a) confirming Wood’s assessment as ‘not a person of good character’ and (b) dismissing his appeal … well, it was bound to attract publicity.

As the first rejection of an application for Authorised Financial Advisor status to be appealed, Property Tutor Sean Wood's case will receive wide publicity. (Click to read at the Good Returns site)

A high-profile property figure has failed in his appeal against the Financial Markets Authority’s decision to reject him as an Authorised Financial Adviser.
Tuesday, April 24th 2012, 3:56PM by Niko Kloeten

Sean Wood, the owner of property seminar and education business PropertyTutors, wanted to become an AFA in order to provide advice on more complex investment products and offer investment management and planning services.
The FMA denied his application on October 21 last year, determining he was not a person of good character after he failed to disclose convictions under the Building Act.

In what is understood to be the first case of its type since the new regulatory regime came into force, Wellington District Court Judge Stephen Harrop has ruled in favour of the FMA.

The judge wasn’t swayed by Wood’s argument that he didn’t realise his convictions, for unconsented building work and failure to comply with a notice to fix in relation to a property in South Auckland, would be relevant to the AFA process.

“Mr Wood’s failure to disclose convictions and, more importantly, the fact of his conduct behind the convictions and his attitude to compliance with the law, mean that he is not of good character such as is required to be an AFA,” Judge Harrop said in his decision

“The FMA quite properly came to the conclusion, in effect, that the adverse inferences it could and did properly draw as to his character meant that it could not be satisfied that he would comply with the onerous documentary, ethical and fiduciary obligations with which an AFA must comply.”

FMA head of primary regulatory operations Sue Brown said it was important that applications to become an AFA were assessed rigorously. “The Financial Advisers Act seeks to promote high standards of professionalism and integrity. FMA’s role is to ensure that applicants have the insight, knowledge and attitude necessary to uphold and respect those standards.”

And the National Business Review: 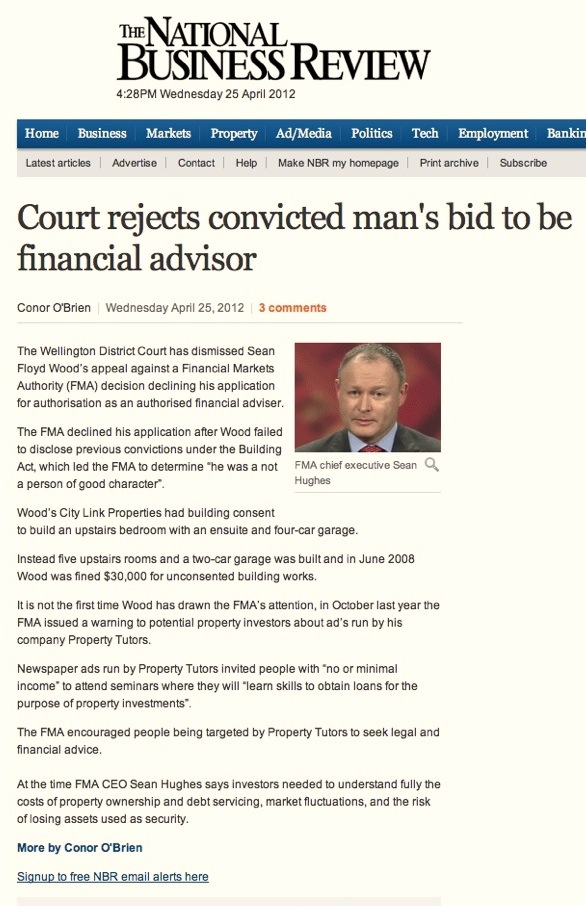 The FMA declined his application after Wood failed to disclose previous convictions under the Building Act, which led the FMA to determine “he was a not a person of good character”.

Wood’s City Link Properties had building consent to build an upstairs bedroom with an ensuite and four-car garage.

Instead five upstairs rooms and a two-car garage was built and in June 2008 Wood was fined $30,000 for unconsented building works.

It is not the first time Wood has drawn the FMA’s attention, in October last year the FMA issued a warning to potential property investors about ad’s run by his company Property Tutors.

Newspaper ads run by Property Tutors invited people with “no or minimal income” to attend seminars where they will “learn skills to obtain loans for the purpose of property investments”.

The FMA encouraged people being targeted by Property Tutors to seek legal and financial advice.

At the time FMA CEO Sean Hughes says investors needed to understand fully the costs of property ownership and debt servicing, market fluctuations, and the risk of losing assets used as security.

I’ve said before, in relation to another property spruiker Dean Letfus: Eventually, we each get the reputation we deserve.