Of logs, eyes, and attributing motives

I got talking over lunch with a friend of mine, Graeme (who comments here at The Paepae as ‘Graeme’). 🙂 Afterwards, I asked him to send me his thoughts about an aspect of that discussion, and he sent me this. I found it good … and share it with you.

Peter, I’m really disturbed by some comments made after your recent post, “Is this what we want? Internet ‘take down’ and indefinite gagging orders?”, especially as some seem to come from professing Christians. I don’t know anyone involved besides you and I don’t want to point the finger at anyone but can I contribute the following, in hope that we may all self-correct?

Someone once asked, why do you focus on the speck in another’s eye, but ignore the log in your own? Someone else said, the unexamined life is not worth living, so isn’t it worth us asking, What log? What’s obscuring my vision?

As I see it, it’s the worst flaw in our judgment, and the commonest cause of communication break-downs and verbal conflicts in our society – we simply misjudge each other.

It’s tricky, judgment. You often hear people say, “We mustn’t judge”, seemingly about anything or anyone. And we know that if we judge everything and everyone, we’re just asking to be condemned ourselves. No-one likes the overly-opiniated or overly-critical.

But if we don’t judge anyone, we become unsafe. We have to judge behaviour, not least to teach our children about not accepting treats from suspicious strangers, and we have to judge words, so we don’t get misled or buy the wrong product.

There’s also the problem of judging too quickly. As the proverb says, ‘The first to present his case seems right until another comes and examines him’. Haven’t we all had to change sides, even if it’s only been while watching a trial on television? In gardening terms, I can’t tell what kind of citrus tree I’m looking at until oranges, lemons or grapefruit ripen on its branches.

These judgments reveal more about us than others. We assume or attribute bad motives to others because we’re insecure, fearful, overly-sensitive or, worse, because we’re choosing to be unloving. Love believes the best, hopes the best of others, so what is it when we believe the worst, hope the worst, assume the worst of others?

Most of the time, what’s needed is proper dialogue, preferably “kanohi ki te kanohi” i.e. face to face, when we can ask questions or seek explanations. It’s surprising how quickly light can replace heat in our discussions and arguments if we will just commit to loving and clarifying before we judge anyone. We might even resolve issues and be reconciled. 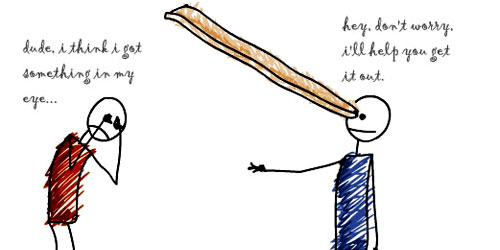