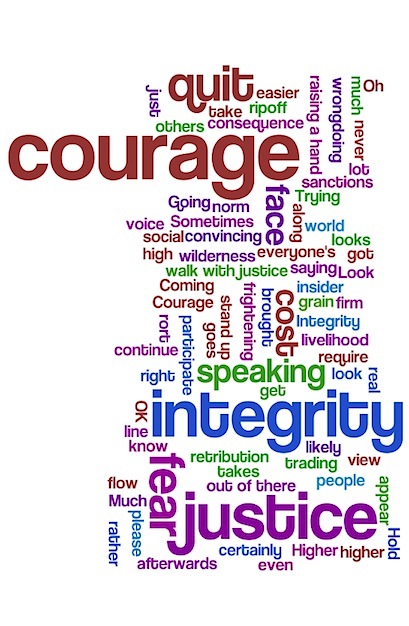 It takes courage to speak up (image: wordle.net)

Thank goodness there are still people like this in the world …

A former staff member of failed finance company Bridgecorp has told the court she and her colleagues were told to lie to angry investors who had not been paid.

Katie Greengrass told the Auckland District Court that it was clear “investors were not being paid”.

She said staff were told to blame the lack of payment on a “banking glitch”.

Greengrass was giving evidence at the depositions hearing against Bridgecorp directors, who each face 10 charges brought by the Securities Commission relating to issuing false prospectuses for the finance company that still owes 14,500 debenture holders $459 million.

…. Greengrass told the court this afternoon that when staff arrived back from their Christmas break in 2007, the phones were ringing.

She said her supervisor went into a meeting with Petricevic before addressing her and her colleagues saying: “OK, ladies, here’s the line.”

Greengrass said she told the colleague: “No more lies” and was sat down in a corner and given another job to do.

“No more lies”. Good for her! That’s taking a stand. More than some would do.

Look, I know it can take a lot to stand up in the face of wrongdoing. My half-jokes about Asperger’s aside, it’s pretty obvious that most people are brought up to ‘please’ others (‘Can’t we all just get along?’)

So raising a hand and saying “Hold on, this isn’t right!” goes against the grain, it takes social courage — even if your livelihood isn’t on the line.

Coming out afterwards is never as convincing, and certainly doesn’t require the courage of the ‘voice in the wilderness’.

Fear: Sometimes, in the real world, the sanctions and retribution you may be likely to face as a consequence of speaking up can appear frightening. The cost looks high. But what’s the cost of NOT speaking up? Higher in my view. Much higher.

I heard from a friend today about a situation where an employee of a big firm refused to be part of a routine options rort — where insider trading was ‘the norm’. He quit the firm rather than participate in the ripoff. Courage. Integrity. He got out of there and can continue to look at himself in the eye as he shaves each morning.

Trying to walk with justice.