« Don Brash’s ACT will cannibalise National
I can see Pakistan from my house. Security clearance? You betcha! »

“The only way a reporter should ever look at a politician is down.”
— David Broder 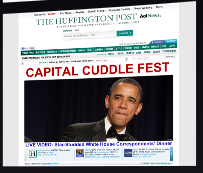 That’s a pretty harsh line from veteran US political journalist/columnist David Broder, widely regarded as ‘the dean of the Washington press corps’. It’s quoted in a pretty good opinion piece from The Washington Post’s Dana Milbank on how journalists socialising with politicians (typified by the annual White House Correspondents’ dinner) can start to feel compromising …

How the journalist prom got out of control

… I don’t fault any one host for throwing a party or any journalist for attending. Many of them are friends. There’s nothing inherently wrong with savoring Johnnie Walker Blue with the politicians we cover.
But the cumulative effect is icky. With the proliferation of A-list parties and the infusion of corporate and lobbyist cash, Washington journalists give Americans the impression we have shed our professional detachment and are aspiring to be like the celebrities and power players we cover.

The ‘socialisation of the elite’ — wherein fire-breathing radicals enter the legislature and become accustomed to deference, fawning staff, doors being opened for them, chauffeur-driven cars, silver service etc … and thus, inexorably become part of ‘The Establishment’ they railed against as outsiders … well, it doesn’t just apply to politicians. I’ve seen that with my own eyes. Milbank is right.
Journalists need to watch our headspace, too. There is such a thing as too cosy.

It’s the same in industry groups (no matter how loose or informal).

A property spruiker some authors and I sued for copyright infringement was, apparently, very upset and stressed by our public criticism of him. Like others before and since, he appeared desperate for acceptance. He wanted to be seen as ‘a peer in the industry’. And not just a peer — typically, he was quick to shallowly describe himself as a ‘respected…’, ‘top…’, ‘most successful…’, ‘#1…” whatever the hell it was he was narcissistically claiming to be an expert at that week. (Self-aggandising is often a dead giveaway. Consider Donald Trump.)

The idea this ‘operator’ repeatedly tried to promulgate was that he was an ‘industry leader’ … and that ANY criticism, or questioning of his conduct and boastful marketing claims was, so he claimed, ‘competitor-bashing’. (And therefore, by definition, factually incorrect? How so?)

Criticism of his predatory wolf-in-sheep’s-clothing, tinsel paper castle by members of the news media was also ‘corrupt’, ‘biased’, ‘vulgar’ or ‘repulsive’ or the like, he claimed in outrage. (Yes, I can understand how you might reach the conclusion he was a couple of sandwiches short of a picnic.)

We’ve seen the same claims of ‘competitor-bashing’ spouting from sockpuppets here on this site: ‘Jennifer’ defending Shaun Stenning, and ‘Don Smith’ waxing lyrical about what a ‘hater’ I am on Steve Goodey’s blog, and other spruikers making bogus claims that I’m only pointing out the trail of terrible consequences for their ‘students’ because I’m [allegedly] a competitor. Or bitter. Or irrational. Or something…

I’ve tried to explain before that I didn’t/don’t see myself as being in the same field as these spruikers, but to no avail. That “Oh, that Peter’s exactly the same as us” shtick is the only so-called ‘mud’ they seem to be able to dredge up to fling in my direction, so what the hell.

It’s useful for a critic to keep a certain distance from those whom they survey. I don’t quite go as far as Broder’s ‘look down on’ sentiment. I agree with my friend Perry when he says contempt is overrated. But be careful with whom you get into bed, or business, as it may affect your reputation for integrity — just as with the journalists and politicians. You don’t want to be in a position where you ‘give amnesty’ as Jon Stewart says, too readily, or for the wrong reasons.

Which is Dana Milbank’s point, and, really, David Broder’s before him.
And mine.
– P