« No hard feelings – present some facts
Worth reading … »

A nice bit of (historical) perspective, and reminder just how truly corrupt the Nixon administration was … 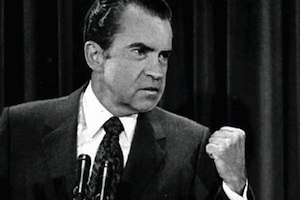 Nixon — political combat to the point of crime ('If the President does it, it's not a crime.' Oh yeah?) image: thepunch.com.au

No, this isn’t “Watergate” (and never will be)

Republicans have fantasized about a Democratic “Watergate” for decades. Can they still remember the real thing?
by Joe Conason | Salon.com

As Conason points out, shallow comparisons are often trotted out by people who offer weak argument in the absence of facts. They try to group things together that don’t belong together, to equate people or organisations that are different. They sometimes use a misleading shorthand which, effectively, aims to deceive.

His final line is a hoot too:

So perhaps the time has come to amend or extend Godwin’s Law:
The first to cry ” Watergate” loses the argument.