How liars deal with a challenge 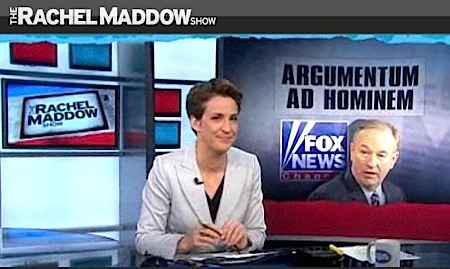 Rather than contribute to a debate about ‘the facts’ Maddow asserted about him and Fox News, (e.g. ‘This is why what she’s saying is wrong…’) Bill O’Reilly merely whacked Maddow’s sincerity (‘you have to be kidding’) and mental alertness (‘Unbelievable. Do you even live in this country?’) and then trumpets the relative ratings of their networks (Fox ‘kicks your network’s butt every night, madam’).

In other words, a smoke screen. (A classic example of a bully’s crap argument style.)

That’s pretty much how liars deal with someone challenging them:
(1) Ignore the facts or assertions of facts
(2) Abuse and smear your critics as somehow mentally deficient or ‘envious’ of your ‘achievements’
(3) Go on working your con-game and feeding your lies to anyone who will listen … until you are finally exposed by inconvenient truth (like Bernard Madoff?) and STOPPED IN YOUR TRACKS.

Then, when you’re out of jail again, move on.
Find another niche (maybe in another country?) Rinse and repeat.

Watch the Rachel Maddow video below the fold. Or visit her page at MSNBC