Have you voted in Campbell Live’s GCSB poll? 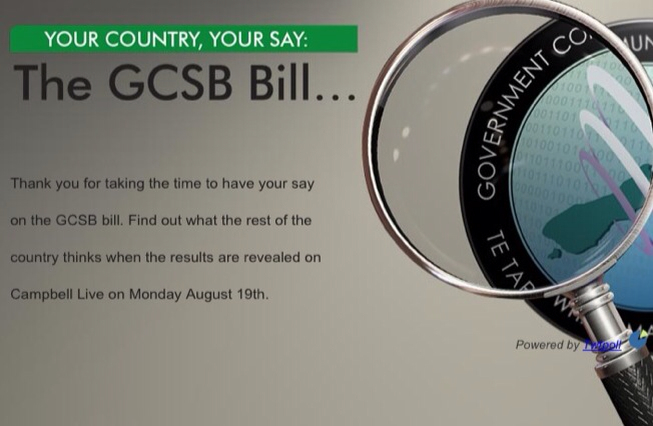 I have not participated in the angst-ridden/gloating discussion about how spymaster prime minister John Key ‘performed’ in his appearance on Campbell Live this week — ostensibly to defend and/or justify his GCSB Bill and its new, to-be-expanded powers of domestic surveillance provisions.

Judging by a superficial reading of the reaction to the interview, people’s view of the encounter largely fell into the realm of “What you see depends on where you stand”.

Mr Key’s entrenched detractors seemed to crow about him looking implausible blah blah, while his supporters (predictably) thought he ‘bossed’ John Campbell and controlled the ‘debate’. Same old same old in other words.

I watched it — twice. Overall, as much as I like and respect John Campbell (i.e. a lot) I thought Mr Key had the most to lose and really did very well as a sparring partner. He bobbed and weaved, ducked and dived, promised to cover off things (that he didn’t actually) … generally made great use of his unflustered, no-worries demeanour. He didn’t come across as aggressive or defensive, and, it seems to me, avoided Campbell’s attempts to land a punch.

Key was at his brazen worst/best (pick one) when he blithely declared again that everybody else (experts) opposed to his GCSB Bill doesn’t understand it or is wrong.

And for my money, John Campbell was bang on when he declared, with some exasperation, that the prime minister is someone who “plays the man not the ball”. That seems inescapably true. John Key routinely smears people. (It’s a quality I dislike. Perhaps the most.)

One of my Twitter buddies, Lew Stoddard posted a series of very good arguments (in my opinion) .. so good I found myself bookmarking a bunch of them … so here they are.

Anyway, however you feel about the issue you only have a couple more days to vote in the Campbell Live poll. I have.