Do your opinions invalidate your reporting?

While we’re down this ‘your opinions make your journalism questionable‘ rabbit hole, if you’re interested, in the US a reporter/columnist for The Washington Post, David Weigel has just been fired/’resignation accepted’ after email trails revealed his rather robust private-ish views of some in the right wing movement (Tea Party etc) it was his beat to cover… 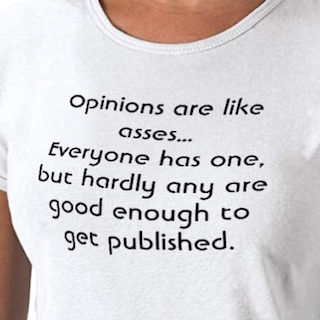 “I’ve always been of the belief that you could have opinions and could report anyway …. people aren’t usually asked to stand or fall on everything they’ve said in private.”

One conservative(?) er, ‘publication’ which got hold of his emails, launched a hit piece of their own against Weigel, like this (reporting/commentary by Jonathan Strong, DailyCaller.com):

Weigel seems to harbor special contempt for a type of conservative he calls a ratfucker, a favorite phrase of his.
In a thread with the subject line, “ACORN Ratf*cker arrested,” Journolisters discussed how James O’Keefe, whose undercover reporting showed officials from activist group ACORN willing to help a fake prostitution ring skirt the law, had been arrested in another, failed operation at Sen. Mary Landrieu’s (D-LA) office.

“He’s either going to get a radio talk show or start a prison ministry. That’s was successful conservative ratfuckers do for their second acts,” Weigel wrote, likely alluding to Nixon aide Charles Colson who converted to Christianity after a stint in prison for obstruction of justice and founded Prison Fellowship.

I don’t have a problem with any of that. Jeez, those comments are his (private? public? who cares?) reaction to that larcenous character setting up ‘sting’ type operations to create political embarrassment … for Democrats. That he got arrested trying another stunt? That *IS* funny.

And razzing Chuck Colson is fair game — although a friend of mine says he’s become a giant of man since ‘turning his life around’. Sounds fair enough. Second although: I’m not sure the Religious Right is all that good for American politics, however.

I actually like the form Weigel used …. may use it myself. This writing, for example, is 1) simple and 2) effectively makes its point:

“I think pointing out Coakley’s awfulness is vital, because it’s 1) true and 2) unreasonable panic about it is doing more damage to the Democrats,” Weigel wrote.

… Weigel describes conservatives as using the media to “violently, angrily divide America.” According to Weigel, their motives include “racism” and protecting “white privilege,” and for some of the top conservatives in D.C., a nihilistic thirst for power.

“There’s also the fact that neither the pundits, nor possibly the Republicans, will be punished for their crazy outbursts of racism. Newt Gingrich is an amoral blowhard who resigned in disgrace, and Pat Buchanan is an anti-Semite who was drummed out of the movement by William F. Buckley. Both are now polluting my inbox and TV with their bellowing and minority-bashing. They’re never going to go away or be deprived of their soapboxes,” Weigel wrote.

Of Matt Drudge, Weigel remarked, “It’s really a disgrace that an amoral shut-in like Drudge maintains the influence he does on the news cycle while gay-baiting, lying, and flubbing facts to this degree.”

Jonathan Strong? An unsourced example-free ‘allegation’: “Almost from the beginning there have been complaints that his coverage betrays a personal animus toward conservatives.” Are you for real? That’s your perspective para?

It must have been a quiet news day at the DailyCaller.com, for this ‘news story’ to be the headline. 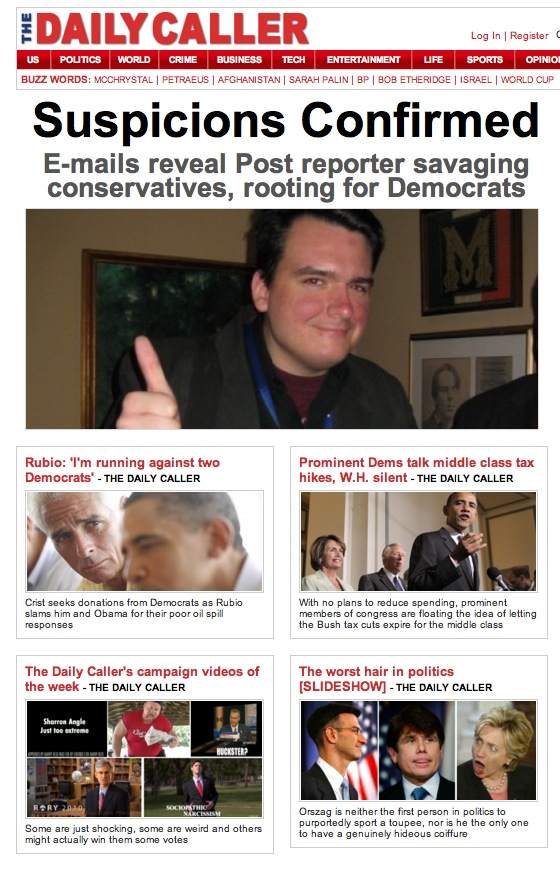 Just as well there’s real news on your ‘news’ website’s front page like this shining example of news you can use:

OK, maybe that’s a bit unfair. While some might call that titilating or pandering, I’m sure yours is a very nice ‘news’ website, Jonathan Strong, that upholds ‘conservative values’. (Like Bash-the-Democrats-every-chance-you-get).