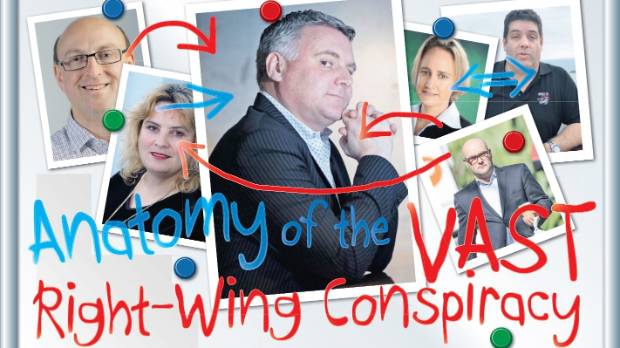 The Spinoff website recently carried two worthwhile retrospective articles looking at the impact of Nicky Hager’s book Dirty Politics. Read them if you’re interested via the links below.

First, ‘Sunlight did what sunlight does: Nicky Hager on Dirty Politics, three years on’ (link to The Spinoff here) which includes a good number of points with which I agree, including this about political operative David Farrar:

Nicky Hager’s point here is entirely correct. David Farrar is a cynical & calculating political operative. Media should treat him like one.

Hager also refers to Jordan Williams, and to the shadowy PR attack machine, ‘NZ Taxpayers Union Inc’ he fronts for David Farrar. Lazy or credulous news media workers treat this enterprise as if it were genuinely representative of something other than demeaning its principals’ political and commercial opponents, in classic Dirty Politics brigade style:

Nicky Hager’s article is definitely worth a read. It doesn’t mention Matthew Hooton, though, so I’ll come back to that.

Hayden Donnell’s article ‘Dirty Politics turns three: where are Cam, Jason, Carrick and the rest now?’ (link to The Spinoff here) is quite a romp …and funny.
Just like it says on the tin, Donnell takes a look at the fate of some members of the Dirty Politics brigade since the book’s publication. I’m not sure whether to be grateful or annoyed with him for sharing this photo of the now diminished Slater Jnr: 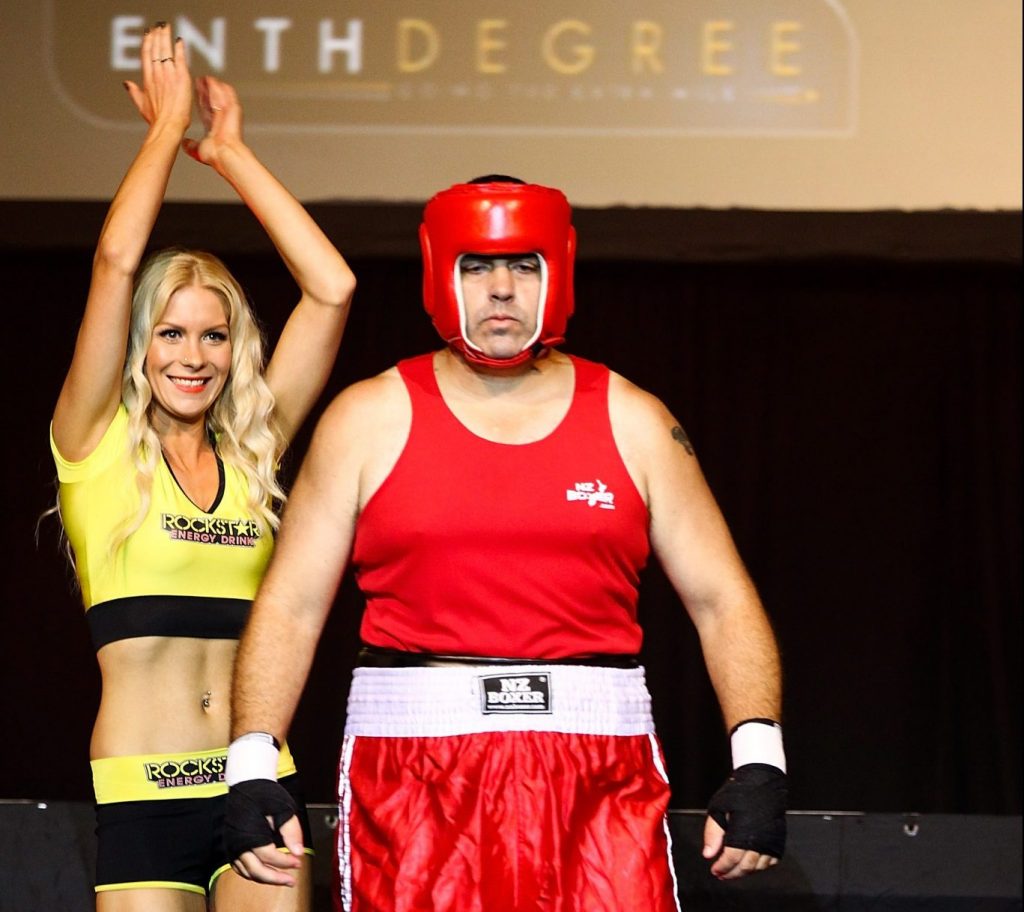 Big-talking Cameron Slater minutes away from hitting the canvas … and HITTING THE CANVAS – pic: Getty

It’s now clear that Hager infused Dirty Politics with a powerful curse on Cameron Slater. Nothing short of black magic explains the liquidation of Slater’s life since the book was published. Here’s an abridged list of the terrible things that have befallen him: 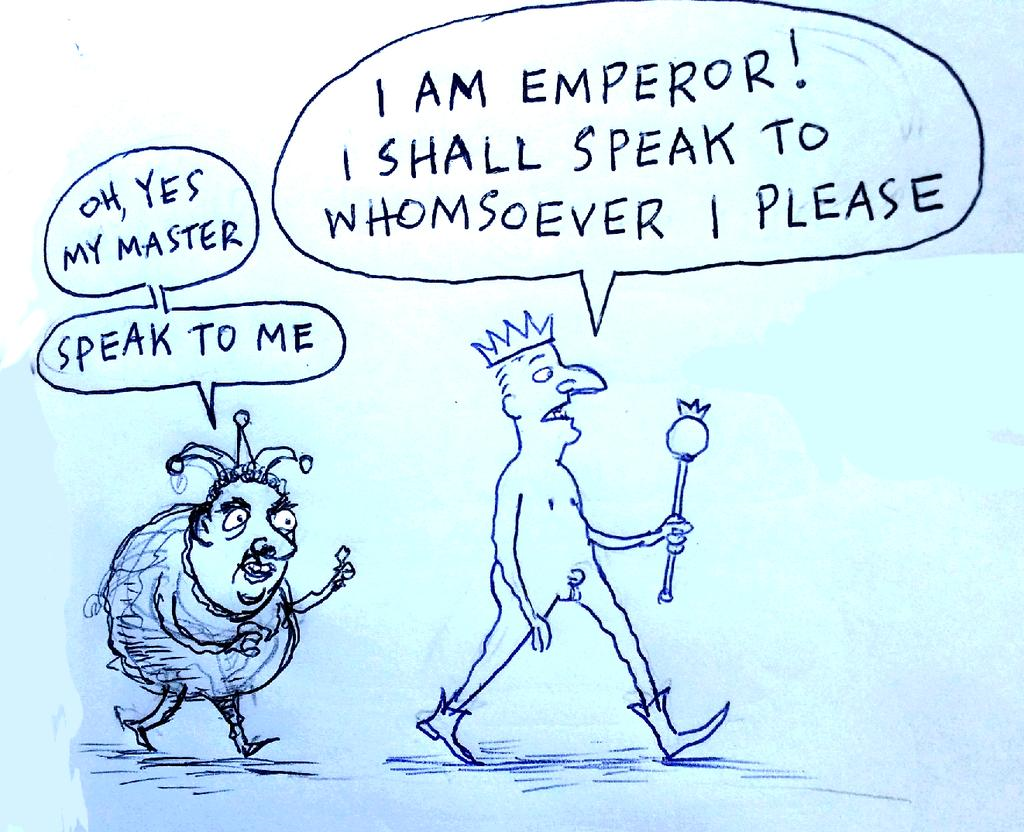 By Sharon Murdoch – so good.  Matthew Hooton is missing from this cartoon. He shouldn’t be.

Donnell relegates Matthew Hooton’s role to that of a ‘bit-part player’:

Hmmm. That’s not quite how I see it.

Now, I’m not going to find fault with Donnell’s very entertaining piece, nor with Hager’s for maybe playing down/missing the point about Hooton. Personally, I think Adam Dudding had it right: He put Hooton, not attack bloggers Slater or Farrar, at the centre of the Dirty Politics wiring diagram… 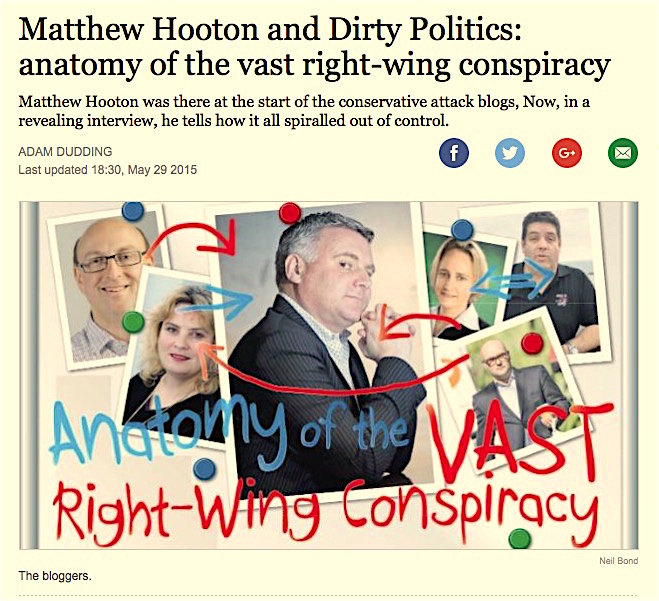 Go and read Adam Dudding’s piece at stuff.co.nz (as is my practice, I’ve archived it, so a copy of it is contained on this site too) and I make no apologies for including this extended, illuminating excerpt:

Even if Hooton is only a minor target in Dirty Politics, though, his associations with the main players still go way back. He first met tobacco lobbyist Carrick Graham when they were both 8 years old and attending Kings Prep School. They’ve since worked together and as rivals, in PR.
He got to know Kiwiblog’s David Farrar in the 1990s when they were both spin-doctors for National ministers.
In the mid-2000s, though, the opportunities for politically like- minded people to find each other exploded, with the growing popularity of blogs – online outlets where anyone could rant about whatever they liked.
There were blogs about food and film and pets and sexuality, but for political bloggers, the internet became a quasi-journalistic wild west, where defamation laws could be pushed to the limit, where political insiders could release facts or opinion without being hamstrung by traditional media rules about balance, accuracy and context. There were bloggers on the far left, the far right, and everywhere in-between, and for many blogs the only people reading them were other bloggers.
But in 2008, the last year of Helen Clark’s Labour government, a handful of the more popular bloggers on the right found common cause in wanting to see Winston Peters out of the election race. They were also all keen to see Clark’s electoral finance bill defeated, and, of course, for National to come to power.
They called themselves the Vast Right-Wing Conspiracy (VRWC), in a mocking nod to Hillary Clinton’s use of the phrase during the Monica Lewinsky scandal. Occasionally they’d meet in the real world for a drink or a meal, but mainly they talked in emails, on Facebook, in each other’s comment section. It was a loose coalition with numerous lesser blogs on the periphery, but the core was well defined, says Hooton.
There was Farrar and Slater, whose Kiwiblog and Whale Oil blogs had the biggest readership. (Slater, son of a former National Party president, was politically well-connected, but he was initially best known for his tendency to break court suppression orders, and his viciously abusive, near-psychotic prose style).
Hooton, meanwhile, was blogging on the now-defunct site NZ Pundit. There was also Odgers, who he describes as a “fantastically crazy Hong Kong lawyer who loves champagne … and lives a life of hedonism” who wrote acerbically as “Cactus Kate”. Tina Nixon, a Wellington public servant, was “Busted Blonde”, and Charles Finny, then head of the Wellington Chamber of Commerce wrote as “Queen Bee” on a blog he called “The Hive”.
They sometimes acted in concert, but Hooton sees nothing wrong with that. “We tag-teamed, like political activists do – ‘I’ve heard this; I’m going to to write that; you guys might want to follow it up’.
“It was normal political activism, with the usual extremely foul language, and ironic and sometimes deeply inappropriate comment, in the way people talk when they’re in private with friends, or at the pub.”

It’s bittersweet reading about how these guys and gals worked. The ‘tag team wrestling’ approach endures, with Hooton (as discussed here) now also employing apprentice Ben Thomas as (to use Andrew Geddes’ term) his ‘mini-me employee’ to spread the … um … message. Political allegiances and conflicts of interest? No worries, mate.

Of the ‘crew’ Adam Dudding referred to, only a few are left standing. Cathy Odgers has tried to disappear, Tina Nixon/Busted Blonde, and Charles Finny seem to have sunk below the waves, as he relates. (Maybe they’re on Facebook? Gawd, I don’t have the stomach to check.)

Matthew Hooton is now attack-blogging for The National Business Review, where he is lead writer and spiritual editor-at-large and, it seems, highly influential. David Farrar is still running his awful but, I don’t know, I guess popular(?) Kiwiblog site —dispensing ‘hits’ and carefully calculated smears to his toxic but lively community of like-minded bigots, hang-’em-high-throw-away-the-key Tories and racists, and, as noted, getting far too much unexamined cosy exposure on Radio NZ.

Those two are I would say, still the most influential. Their puppet, Cameron Slater is now a mere shadow. Good. His awful thrashing about for attention and his wife’s derivative islamophobia and aping Breitbart is even worse than the slavish copying  Slater Jnr did from Andrew Sullivan’s The Dish in the early days.

Carrick Graham in the spotlight again

The conduct it reveals is disgraceful, in my opinion. I referred to Carrick Graham’s sleazy reputation-attacks-for-hire for Ms Dunham last year (see: More evidence that Carrick Graham is a paid character assassin). I’ll discuss this matter further in the near future in the light of what’s been revealed.

Meanwhile the lawsuit against Carrick Graham, Cameron Slater and Katherine Rich must be proceeding … (see Apparently this choir boy and his glove puppet are being sued for defamation). 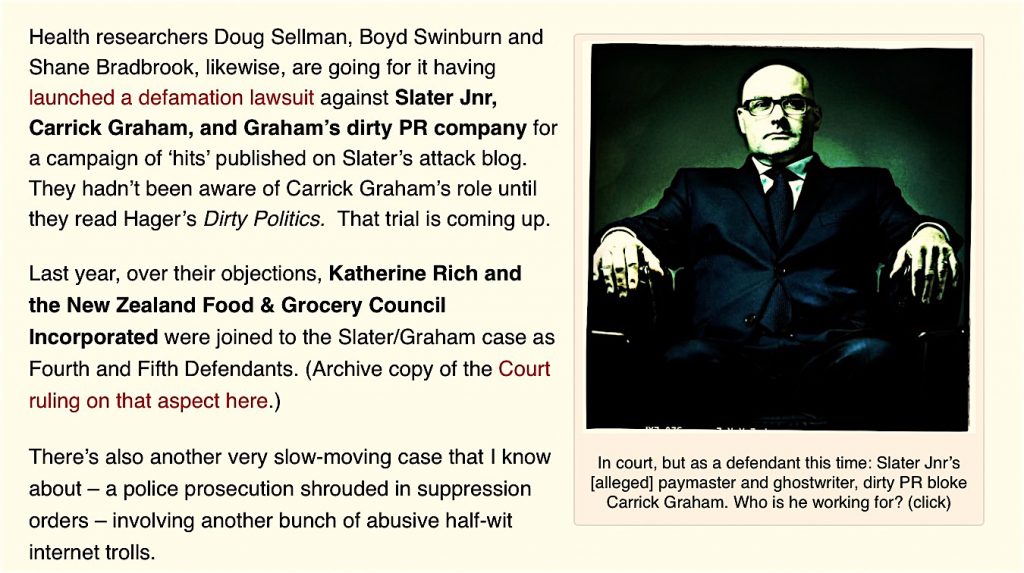 PS The Denham case – a lawyer investigated, prosecuted and (to be) penalised for misconduct – made me wonder again how it is that Jordan Williams has (so far) escaped sanction after Judge Sarah Katz’s catalogue of his actions related to Rachel McGregor. Perhaps things are under way behind the scenes? Dunno.

Archived PDFs:
Sunlight did what sunlight does by Nicky Hager
Dirty Politics turns three: where are Cam, Jason, Carrick and the rest now? by Hayden Donnell
Matthew Hooton and Dirty Politics: anatomy of the vast right-wing conspiracy by Adam Dudding
Why Matthew Hooton is wrong – again by Andrew Geddis