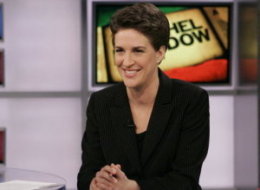 From an excellent profile of the awesomely good Rachel Maddow ‘Rachel Maddow’s Quiet War’ in the June Rolling Stone magazine:

“Yesterday was like a four-star show, I was totally into it,” she says. “Today and Monday – like, blaagh. Like, doesn’t get any worse. I’ve been doing this for four years! Why do I still have one-star shows? It’s me – failure.”
I ask her why she is so hard on herself. “My reaction to that is to say, ‘Oh, another bad thing about myself is that I’ve allowed you to see that I’m hard on myself,'” she says. “The fact that you’re seeing me sweat is like, ‘Ah, well, I’m failing on that, too.'”
Maddow suffers, she says, from “cyclical” depression. “One of the manifestations of depression for me is that I lose my will. And I thereby lose my ability to focus. I don’t think I’ll ever have the day-to-day consistency in my performance that something like This American Life has. If I’m not depressed and I’m on and I can focus and I can think through something hard and without interruption and without existential emptiness that comes from depression, that gives me – not mania. But I exalt. I exalt in not being depressed.” …

This stuff is real and don’t let anybody tell you it ain’t.

People who suffer from depression achieve results through it (like in through dense fog, or pea soup), in spite of it, sometimes defying it. But they’re not necessarily good company to us (non-sufferers) or to themselves during the process.

As I said to a commenter at the weekend: ‘Let’s cut each other some slack.’ Huh?