From the ‘Huh? Wha? Dang!’ files and following on from my post: ‘Is it worth dishonestly defending a reputation? No.‘ 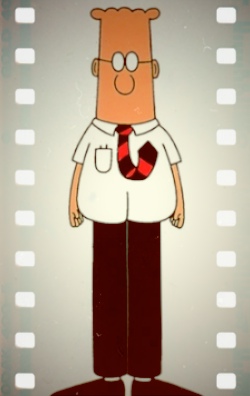 It’s emerged that Dilbert cartoonist Scott Adams, has slipped into the same category as property spruiker Sean Wood — using an anonymous sockpuppet to defend himself from criticism/discussion online. (OK, Adams is not quite as ‘bad’ as MUFFIT/Sean Wood, in that he never claimed to be his own satisfied customer, but still … ew!)

When commenters on MetaFilter started ragging on a recent Wall Street Journal story by Scott Adams, the Dilbert creator and sexist jackass who last month opined that “women are treated differently by society for exactly the same reason that children and the mentally handicapped are treated differently,” one user, “plannedchaos,” leapt to his defense. “He has a certified genius I.Q., and that’s hard to hide,” noted plannedchaos, who went on to ask, “Is it Adams’ enormous success at self-promotion that makes you jealous and angry?”

Mr. Chaos has apparently long been a fan of Adams; Gawker noted Monday that early this year, he was posting on Reddit that “It’s fair to say you disagree with Adams. But you can’t rule out the hypothesis that you’re too dumb to understand what he’s saying. And he’s a certified genius.” How fortunate for Adams there are people in the world not “too dumb” to understand the certified genius. It just happens that they’re all Scott Adams. On Friday, the cartoonist admitted on MetaFilter that he and plannedchaos are one and the same.  My tie! It’s curving upward in astonishment!

Poor form, certified genius or not.

We’ve discussed anonymity here at ThePaepae.com before, and I agree there are times when it’s useful or necessary — but impersonation is a step too far. For me. Personally.

Adams defended his use of an alter-ego, saying in part that he was prompted to do it because of concern for ‘economic harm’:

There’s no sheriff on the Internet. It’s like the Wild West. So for the past ten years or so I’ve handled things in the masked vigilante-style whenever the economic stakes are high and there’s a rumor that needs managing. Usually I do it for reasons of safety or economics, but sometimes it’s just because I don’t like sadists and bullies.

Some time ago, I learned the hard way that posting messages with my own identity turns any discussion into an orgy of name-calling. When I’m personally involved, people speculate that I’m being defensive, or back pedaling, or being a douche nozzle, or trying to weasel my way out of something. Speaking with my true identity also draws too much attention to the very rumors I’m trying to extinguish. In contrast, when my spunky alter ego weighs in, people generally focus on the facts presented, including checking the source material to see my writing in context. The masked vigilante strategy worked well until recently. And I’d be lying if I said it wasn’t fun.

Most of the inaccurate information about me on the Internet is harmless. And negative opinions about the quality of my work are always legitimate. The trouble starts when advocates for one cause or another use me as a whipping boy to promote their agendas. As I mentioned, the way that works is that they take out of context something I’ve written, paraphrase it incorrectly, and market me as a perfect example of the thought-criminal that they’ve been warning everyone about. I don’t think any of this is an organized conspiracy. I think it’s a combination of zealotry, bad reading comprehension, opportunism, and some herd behavior. …

A commenter on his blog posted a link to this um, Scott Adams cartoon:

Anyone can be anyone on the Internet, and for many, anonymity offers a freedom and safety necessary for self-expression. But when someone deliberately misrepresents himself, because he claims his own adoring “invisible friend” is an “unbiased messenger,” when he lies about who he is because it’s “fun” playing the “vigilante,” it’s a profound statement of cynicism about the nature of online community and contempt for his readers.

Gotta say, I agree with her. I see this comment of Adams’s: “When you remove the appearance of conflict of interest, it allows others to listen to the evidence without judging” as irrelevant argument when the so-called ‘evidence’ is glowing personal testimony for yourself. Er, sorry Scott. Fake. Same as MUFFIT.