« OK, so it’s not a hopeless quest …
Multi-touch = the future of interactivity »

Can the crooked ever be made straight? 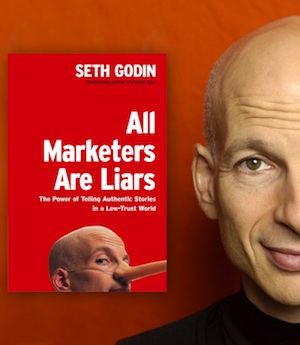 Some salesmen will use every devious trick in the book to get you to sign the dotted line and make their cold hearts dance ka-ching!

They’ll imitate and fake their way through life, ignoring or brushing over the truth, sucking the life and light out of their victims with hyped up promises and weasel words … which lead to a sense of disappointment, despair and, sometimes, self-blame {viz. ‘How could I have been so naive?’).

Giving the sales profession a bad name in the process, some of them are very plausible and engaging — vigorous in their pursuit of ‘fresh meat’, skilled at manufacturing a sheen of likability and false rapport. Michael Lewis alerts us to some of their devices and tricks in Liar’s Poker and The Big Short.

These purveyors of false hope and cupboard love present a carefully polished veneer of lies and half-truths … or sometimes, as a dodge, a deliberately downbeat man-of-the-people schtick. They’re con-artists, pure and simple, and those who have been practising deception for a lifetime can be very convincing. They have learned from their mistakes and ‘corrected’. They’ve had time to reflect, some of them, on their past blunders or when they’ve been caught flat out lying. Look at their personal history. It speaks.

Eventually, it all catches up with them. Consider Bernie Madoff.
People’s past actions leave a mark, in my experience, and sooner or later they become known for what they ARE.

That’s not the only way to ‘do the business’, despite what they demonstrate. Thank goodness for authentic marketers like Seth Godin. Like him, I’ve learned people trust ‘straight’. Many come to appreciate authenticity, but sometimes after bitter experience with the smooth-talking, charming crooks.