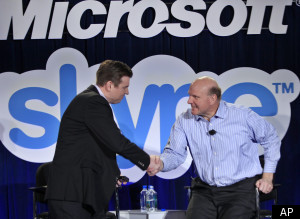 Based on history, the question that emerges for me is how will MS deal with the conflict of interest … and how long before they dumb down the iOS and Android versions of Skype … crippling them like they let the Mac version of Office lag behind the Windows version.

Sure, it’s a different playing field, and, as some have noted, MS is playing catchup — Microsoft Bets Its Online Future On Skype, Amy Lee Huffington Post:

Microsoft has lagged noticeably behind competitors like Apple and Google when it comes to establishing an online presence and providing communications services, especially with consumers. The Windows Phone 7, though well-received by critics, has not yet managed to get into firing range of either the iPhone or the Android phones.

The Skype purchase is aimed at closing the gap by supplying Microsoft a connection to an established brand with voice and video communications. Skype services could also be integrated into the future generations of Windows Phones, giving Microsoft a product comparable to Apple’s FaceTime service.

Everyone I’ve mentioned the acquisition to (not a scientific survey, I grant you) has said something like: “Oh, too bad. They’ll ruin it.”