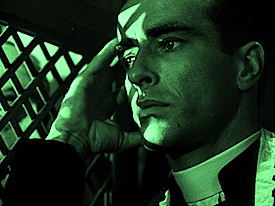 A Member of Parliament admits he has a criminal past. But he does it very badly, slowly, and destroys his own credibility in the process.

I agree with this comment from my old Press Gallery colleague John Armstrong:

When he was asked on Tuesday if there was anything else in his past which warranted mention, he replied that there was nothing other than a few speeding tickets. He made no mention of the identity theft.

This is not good enough. An MP’s words must be able to be trusted. Garrett’s have been rendered worthless.

But I’m not so sure I buy this logic from Annette King:

Mr Garrett, who led the party’s “three strikes” policy on tougher sentencing for serious violent offences, also admitted this week that he had been convicted of assault in 2002 in Tonga.

Labour deputy leader Annette King asked: “Is this strike two and is there a strike three?”

While the issue was quite old, “it’s about the hypocrisy of taking a strong stand when you’ve got a past“, Mrs King said.

How does having ‘a past’ disqualify one from taking a ‘strong stand’? Don’t past mistakes (hopefully) teach us something? Doesn’t ‘a past’, properly processed, actually empower us? I know in my own case, some of my own ‘negative’ decisions and experiences have made me a better man — and determined to live a better life.

This question: “Is there anything else in your past which warrants mention in these circumstances?” is a real test for a public figure. Garrett flunked it.

But I’ve never really bought ‘Let him who is without sin cast the first stone’ as an injunction not to judge — just not to condemn. So for me, the fact that Garrett had criminal convictions does NOT reduce his credibility as a thinker on justice issues — they are ideas that will stand or fall on their own merit. Politics is, after all, partly the competition of ideas.

Of much more import is how he conducts himself.
And sadly, he has let himself down in that score, I agree.
These issues will be seen to ‘go to character’, as our American cousins say.

One of the best lines I’ve heard about someone’s criminal past was in a multi-layered monologue, one of Alan Bennett’s Talking Heads scripts performed by the wonderful Patricia Routledge (paraphrased from memory):

I asked: ‘Do you think it will matter that I’ve been in jail?’
She said, ‘Love, with your qualifications it wouldn’t matter if you’d been in the SS.’

View another example of the Bennett/Routledge magic below the fold.