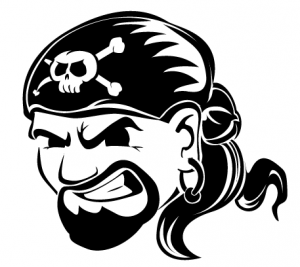 "You're either with us or agin us!" Um, any other options? (pic: theundergroundsite.com)

I’ve been thinking about the subject of deceit in politics and the sad idea that the voting public ‘expects’ a certain amount of spin and marketing (BS) in its political diet.

I posted this comment in discussion about my musings about tribalism ‘National’s desperados get perfervid about Peters‘ before last year’s election:

I usually enjoy politics as a sport — it’s one team’s turn to win, then another’s and that’s OK … but after a while I feel nauseated by the ghastly inauthenticity of the sectarian antics of Party loyalists like those I refer to above.

When I see someone engaging in shabby, venal grasping for ‘power’ and influence, or engaging in ‘the politics of personal destruction’, I think it should almost disqualify them

… but of course, that’s not how democracy works.

Now when I wrote that, I wasn’t aware of this, from Douglas Adams of The Hitch-hiker’s Guide to the Galaxy fame …

It is a well known fact that those people who most want to rule people are, ipso facto, those least suited to do it. To summarize the summary: anyone who is capable of getting themselves made President should on no account be allowed to do the job.

OK, so that’s droll. But thinking about it some more …

When the ACT Party’s David Garrett almost pulled down the temple (well, he certainly loosened a few pillars) with the gradual revelation of misdeeds in his past,  I remember quoting NZ Herald political columnist John Armstrong at his most black-and-white:

“An MP’s words must be able to be trusted. Garrett’s have been rendered worthless.”

And really, I think THAT is the measure — that’s the ‘disqualification’ — whichever Party or politician is at issue. Rather than law-breaking (technical or blatant) or loyalty, or ambition.

As noted before, a theme of this blog is the nonsensical tendency for human beings to suppose that the ‘group’ they happen to belong to (for that’s all it takes: an ‘us’ and a ‘them’) is superior.

We’ve talked about aspects of that delusion a lot. For instance, see: ‘Q: Where does conflict come from?‘ and ‘Tribalism‘ and ‘Sue Kedgley on trench warfare and the value of MMP‘ … among others. Here’s a complete grab from Andrew Sullivan’s blog last night — I hardly ever do that, but although he’s talking in a different context, he’s right on point:

The Daily Dish | By Andrew Sullivan 31/05/12
I noted recently that Republican voters were actually getting more hostile to marriage equality over the last year, while Independents and Democrats were close in their support. I wondered if Obama’s support was more central to a jump in Republican opposition than the substance of the issue itself. Social psychologist Dave Nussbaum points to several studiesshowing how close to incapable we are of analyzing or judging questions devoid of partisanship. A case in point:

Forget the ants. We really are primates in the end, aren’t we?

This is why the pointless sledging and ‘point-scoring’ I often see going in our political blogosphere (and social media neighbourhood) is so dumb.

Like kindergarten kids ganging up on each other, one often sees insults and trash-talk tossed around … and, sometimes, nasty abuse and threats. The usual suspects chuck the usual garbage at each other. Besides the simply crude smack-talk, (recently): “cock, f*wit, dimwit, trainspotter, pipe chuffer, kiddy fiddler”, there’s the occasional funny rebuke:  ‘Now go back to yr bedroom and wank again’ (ha!)

I think of it as the yobos phenomenon (see: ‘Drunken yobos spit in MP’s face, then skite to their mates like idiot schoolboys‘). Like literal drunks, people lose control, vomit or urinate on each other on Twitter or whatever, then, sometimes, one will observe a chastened, half-hearted, tearful reconciliation, or retreat/retraction. Until next time.

It’s not my role to discuss the obvious psychological pain some of these fixated folk seem to be experiencing — indeed, I feel that would not be appreciated. But gee. Something is screwy.

Of course, some people will never agree, not because their ideas are fundamentally opposed, but simply because they’re perceived as being on opposing teams, … or (in my own case) not actually on a team but faced with a [best Long John Silver voice]: ‘Arrr, lad. You’re with us or agin us’.