« Quantifying stalkers
The dark side of social media »

I enjoy the rough and tumble of Radio LIVE’s duo Willie & JT. I’ve said before their ‘political hour’ is a highlight with its irreverent argy-bargy. Who can forget Willie Jackson’s rejoinder to Matthew Hooton “right wing fascist mongrels like you”?

They’re an oasis. The show offers a refreshing, robust counterpoint to the earnest, often tightly-coiffured and terribly time-constrained approach many other ‘media’ are forced to engage. Also, by not being glued to ‘the beltway’ scene nor in the Press Gallery, the pressure on them to ‘be nice’ to retain ‘access’ isn’t as powerful and overwhelming. (It’s still there, but not as strong.)

Yesterday, they had the NZ prime minister John Key on their show, and for half of the very worthwhile, extended, news-making interview, Mr Key engaged in aggressive spin and damage control over the issue of his … incomplete explanations — ‘dance of a thousand veils’ I called it — of his role (and the probity thereof) in appointing a childhood friend to the role of Director of the Government Security Communications Bureau, GCSB or ‘the country’s top spy’ as people are calling him.

Among others things, Mr Key announced that henceforth he would be less ‘accommodating’ with politicians and the media in answering questions on the spot, demanding some questions in writing so that his office could research the answers. See Hamish Rutherford’s John Key changes tack over questioning

You can listen to to the whole interview at Radio LIVE’s excellent website here: John Key defiant Ian Fletcher’s GCSB hiring appropriate – Audio. I listened yesterday, took some notes (old habit) and reviewed it this morning. 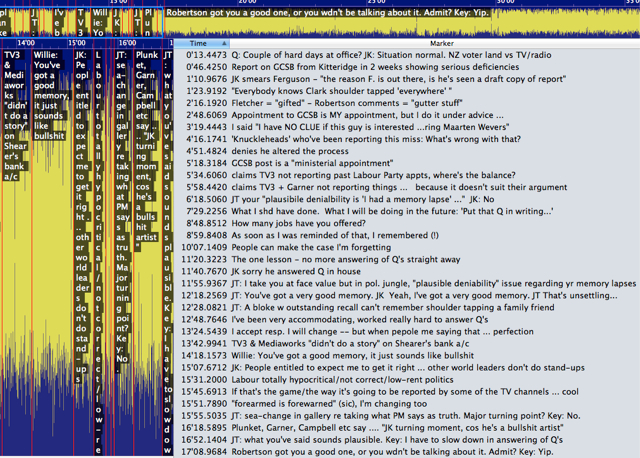 Aggressively going after various reporters and media, some of them (TV3, Mediaworks, and Duncan Garner) by name may play very well to his partisan supporters — “Stick to to ’em Johnny boy!” But as a former press gallery journalist and radio news producer myself, I see such tactics (yes, tactics) as a poor response to pressure.

Mr Key is an artful player of ‘gotcha!’ politics. He’s good at it and he appears to enjoy it, although that behaviour is not widely seen outside Parliament, as others have said. He isn’t the first premier to get in a huff with the media pack when things don’t go his way, and he won’t be the last. (‘Toys. Cot. Sooky.’ as someone in my Tweetstream said. Shudder.)

And Mr Key may or may not remember (ha!) these prescient comments from September 2011 (See: The likability of ‘Teflon’ John Key)

So yes, he says, the day may eventually come when his proudly worn labels of pragmatist and non-ideological get reframed in the public eye as wishy-washy and doesn’t believe in anything.

“In the 24-7 blitzkrieg of the media, eventually they’ll tire of every politician, and I’m not unique in that regard. So the things they like about me, I think you have to accept, over time they won’t like so much about me.

“It’s easy to form a view that every time a journalist writes something bad about you it’s because they’re just against you, and they’re just a puppet for the opposition. You can build up these fiefdoms and prejudices.” — from A prime minister’s view from the top by Adam Dudding Sunday Star Times

But here’s the thing: is it a case of the public ‘tiring’ of a politician? Or a case of a politician running out of steam and stooping to arrogance and insularity — the ‘fiefdoms and prejudices’ he himself referred to?

It’s not fair to single any one person out, as Mr Key has done, but in my view congratulations are due to Fairfax reporter Andrea Vance for her coverage of this issue. As she wrote yesterday: Straight answers rare in spy job saga. Good on her for her persistence and her careful writing.

Straight answers don’t appear to be Mr Key’s strong suit. But perhaps they never have been?: