« Choked? Who? The Aussies?
Priorities »

Putting fuel on the fire

Enough with the sheep jokes, already!

As a Kiwi with Australian friends, I’ve had plenty of opportunity to be a good sport over so-called ‘jokes’ about New Zealanders and sheep. (Example: “Q: How do NZ’ers practice safe sex? A: They paint an ‘X’ on the back of sheep that bite.”)

Especially when I’m visiting the Lucky Country, I try to take a good-natured attitude to the ribbing … and gently give a little back: “The Kiwi reached the immigration desk at Collangatta airport and was asked, ‘Do you have any criminal convictions?’ to which replied, ‘I’m sorry, I didn’t think you still needed one of those to get into Australia.” 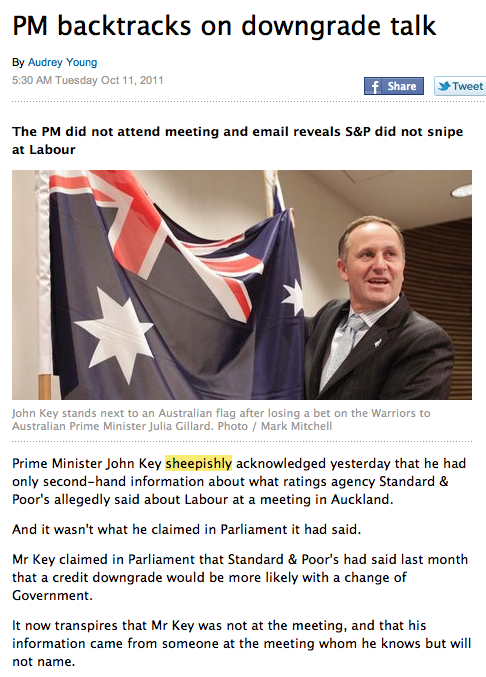 Sheepishly acknowledged? Wan't there another way to say it, Audrey?

Anyway, I spotted this article PM backtracks on downgrade talk in the NZ Herald online (I hadn’t read it at the time): Audrey Young writing about NZ Prime Minister John Key revealing the basis for his ‘reporting’ in Parliament an expression of Standard & Poor’s rating agency’s [alleged, and since denied] attitude towards a change of government. (See my post: Hansard can be a real bitch, eh Mr Key? for background.)

Prime Minister John Key sheepishly acknowledged yesterday that he had only second-hand information about what ratings agency Standard & Poor’s allegedly said about Labour at a meeting in Auckland.

And it wasn’t what he claimed in Parliament it had said. …

‘Sheepishly’? Oh, please, Audrey. We don’t to give the Aussies any more ammo.