Good on Google for deciding that censorship was dodgy.

It was always, always dodgy,* but perhaps the ‘commercial imperative’ had driven the free-thinkers at Google to submerge their outrage. ( — which is NOT a long term strategy, as we have discussed in relation to an example closer to home.)

From the Google blog today:

A new approach to China: an update

3/22/2010 12:03:00 PM
On January 12, we announced on this blog that Google and more than twenty other U.S. companies had been the victims of a sophisticated cyber attack originating from China, and that during our investigation into these attacks we had uncovered evidence to suggest that the Gmail accounts of dozens of human rights activists connected with China were being routinely accessed by third parties, most likely via phishing scams or malware placed on their computers.

We also made clear that these attacks and the surveillance they uncovered—combined with attempts over the last year to further limit free speech on the web in China including the persistent blocking of websites such as Facebook, Twitter, YouTube, Google Docs and Blogger—had led us to conclude that we could no longer continue censoring our results on Google.cn.

So earlier today we stopped censoring our search services—Google Search, Google News, and Google Images—on Google.cn. Users visiting Google.cn are now being redirected to Google.com.hk, where we are offering uncensored search in simplified Chinese, specifically designed for users in mainland China and delivered via our servers in Hong Kong.

And how sad is this?: (Click on the image to go to the latest status update.) 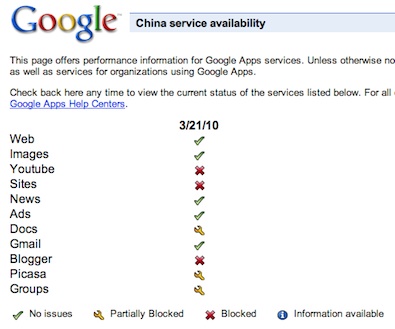 I'd HATE to think a discussion forum needed to publish a list like this
... users who are blocked or partially blocked etc

* Unless genuine law-breaking is implicated. I’ve had Google drop adsense links to operators infringing my trademarks, and clearly, defamatory comments (real ones) should be expunged.