« Pushing the boundaries
Q: Where does conflict come from? »

Handling the truth… and a parable 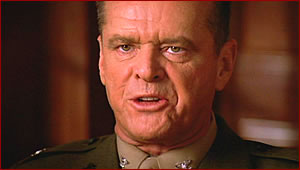 Can you handle the truth?

Son, we live in a world that has walls and those walls need to be guarded by men with guns. Who’s gonna do it? You?
I have a greater responsibility than you can possibly fathom. You weep for Santiago and curse the Marines; you have that luxury. You have the luxury of not knowing what I know: that Santiago’s death, while tragic, probably saved lives and that my existence, while grotesque and incomprehensible to you, saves lives.
You don’t want the truth because deep down in places you don’t talk about at parties you want me on that wall, you need me on that wall.
We use words like honor, code, loyalty. We use then as the backbone of a life trying to defend something. You use them as a punchline. I have neither the time nor the inclination to explain myself to a man who rises and sleeps under the blanket of the very freedom I provide and then questions the manner in which I provide it. I would rather you just said ‘thank you,’ and went on your way.
Otherwise, I suggest that you pick up a weapon and stand a post. Either way, I don’t give a damn what you think you are entitled to.

I had reason to remember this interchange this afternoon when a friend suggested I wasn’t being told the truth about a situation not because I couldn’t ‘handle it’, but because the people involved felt they couldn’t trust me enough to tell me the truth. They felt they had something to lose if they told me the truth.

So (my friend suggested) they lied to me.
And thus proved untrustworthy themselves.
See how it starts?

Chapter 1
One evening a man came home from work to find a snotty nosed youth walking out of his house with a bag over his shoulder. The man recognised the boy as the village thief – a vagabond who’d been caught stealing from other townsfolk several times before and as a result was distrusted by all in the village.”Stop” shouted the man, frightening what passed for wits out of the boy. “Put that bag down.” His pants now thoroughly wet, the young thief reluctantly complied.

Upon examination, inside the idiot’s loot bag were goods and valuables he had stolen from the man’s house and also from his neighbours. “Please Mister”, pleaded the fool. “Please don’t call the cops”. A look of fierce concentration transfixed his face. Finally, a dull light gleamed somewhere deep in his heavy cranium. Wiping the drool from his chin, he said, “I’ll tell you what: if you let me go free, I’ll give this bag of stuff to the charity of your choice.”

Chapter 2
Of course the man rejected the meaningless ‘settlement offer’.
“You’ll have to do better than that,” he said as he led the squealing boy to the police station. “You’re going to account for your actions.”
To locate other owners of the booty in the thief’s loot bag, the man put a notice in the window of the friendly village newsagent: ‘Seeking information: stolen property’.

A few days later he was surprised to see the freshly-bailed fool and his cousin, a defrocked priest now working as a loan shark, harassing the newsagent: demanding that she remove the public notice from view.
“It’s potentially defamatory,” blustered the usurer while the half-wit snivelled noisily in the background. “You’re committing a criminal offence… um, err, in my opinion.”

The newsagent was fairly sure the public notice offended no law, despite the claims, but she didn’t want the hassle of an argument with the slobbering youth and his odious henchman. (Distasteful as the little thief was, he was also a customer — when he wasn’t trying to shoplift.) As she explained to the man later, “Perhaps these hooligans are crazy enough to act on their threats to damage my store.”

So the newsagent removed the public notice from her window — which left on display only the copies other townsfolk had pinned to lamp posts throughout the village; and of course the notice the man had nailed to his own front gate for all to read. (He certainly didn’t believe the stooges’ vacuous claims.)

Postscript:
The newsagent’s squeamishness merely emboldened the thief and his crooked companion. Shortly after her capitulation over the public notice, the same two snotty-nosed bully-boys returned with a very similar menacing hoax — this time demanding things of much, much greater value from the newsagent — showing that if you don’t stand for something you’ll fall for anything. But that’s another story.

Lies bind the liars together.
Tell the truth.
Let the chips fall where they may.