With sympathy for my friends at the NZ Herald

I said at the time (The twisted trail of the NZ Herald’s ‘statement from the editor’ re Ms Glucina) that Rachel Glucina’s shabby little smear job seemed intended to portray as “political” the café worker who exposed NZ Prime Minister John Key’s repeated harassment. That was Ms Glucina’s goal, it seemed to me — to take some of the heat off Mr Key. Smear the messenger.

But responding to formal complaints, including mine, TVNZ sought to defend Hosking’s personal attacks on the café worker as the legend in his own lunchbox expressing his Bill of Rights protected freedom of opinion. Time will tell, I guess, when the Broadcasting Standards Authority releases its determination based on the complaints referred to it.

Like Hosking’s awful rant, Ms Glucina’s evident lack of professionalism, followed by the convincing headless chook impersonation in the NZ Herald‘s offices have lowered respect for the media outlet and embarrassed its staff. Today a NZ Press Council decision was published, in part upholding a complaint that Glucina used ‘subterfuge‘ and the newspaper failed to act fairly towards the victim. 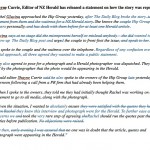 Read the full Press Council decision at its website, or here it is as a PDF.

Unlike some observers, the Press Council didn’t perceive anything more sinister than ‘confusion’ in Herald editor Shayne Currie’s curious and repeatedly-altered ‘statement from the editor‘. Bokay. They did, notably, perceive Mr Currie’s changes as backing off from defending Ms Glucina’s “professional integrity”. 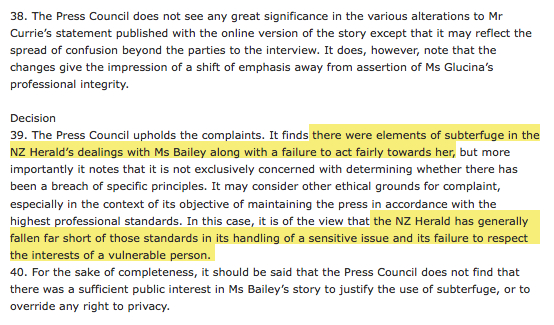 I’m pleased the Press Council wasn’t satisfied with the Herald editor in chief’s obfuscation, denial and apparent loss of mental acuity/brain fades in his replies to the complaints. But it must have been galling for Tim Murphy to defend Ms Glucina’s actions as one of his last acts in the job.

The Herald printed an article about the Press Council decision on page 3 of today’s paper and on its website: Press council rules against Herald on ‘Ponygate’ interview.

An apology to Ms Bailey would be a good step, a welcome step. But don’t hold your breath.

I’ve been told there was considerable celebration in the NZ Herald newsroom when it was announced Ms Glucina was leaving NZME for greener pastures at gummint-friendly Mediaworks. I wonder how my ex-colleagues at Mediaworks are feeling about Mark Weldon’s latest hire?