A lot of journalists, myself included, are compulsive information hoarders. We archive and keep things ‘just in case’ we may some time, in the distant future, want to refer to it. I keep this scan of Tim Hunter’s story about Carrick Graham deviously spinning for Mark Hotchin in that category. Who knows when I might want to refer to it?

I remember wincing with recognition when I read a report that around the time she was charged in connection with the News Of The World phone hacking scandal, Rebecca Brooks had instructed her PA to go into a storage room and remove a box of Brooks’ journalistic notebooks from her time at the paper … and they were never seen again.

Technology’s on our side. Just as the NSA declared its mission statement in in the slogan ‘Sniff it all, collect it all, store it all…’ (or something like that) … 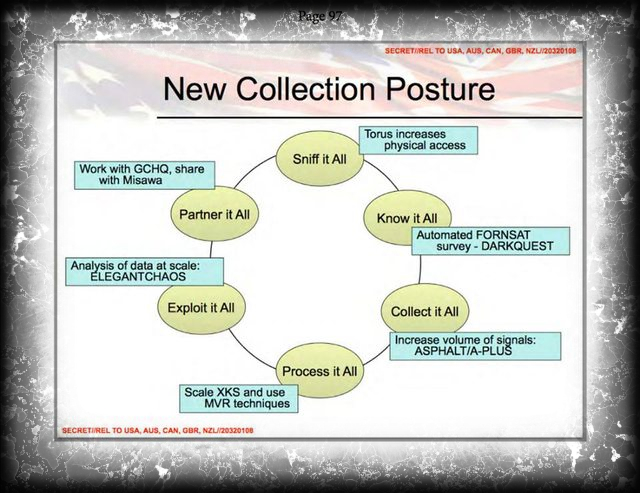 … so it’s a few mouse clicks to retain a copy of something published on the ‘web’. I do it all the time, and store a lot of that ‘data’ in a brilliant (Mac) programme called DevonThink Pro, which applies devilishly clever AI to categorise and make links between data in my database-archive(s). (DTPro is a brilliant tool and I heartily recommend it.)

Pretty yellow journalism at the best of times.

Anyway, yesterday, it became clear that NZ Herald ‘reigning gossip queen’ Rachel Glucina had seemingly acted in an ethically questionable way (see below) to get a statement/interview from the woman at the centre of a scandal about the NZ Prime Minister repeatedly harassing a waitress by pulling her hair. See The Daily Blog for the original story and a follow-up with the waitress’s account of Ms Glucina’s actions.

I said after reading Ms Glucina’s piece that it seemed to me she’d gone into damage-control mode for the Prime Minister (she’s a fan) and had attempted to characterise the waitress’s speaking out as a political act:  ‘That “strong political views” phrase seems like the whole point of Ms Glucina’s and @nzherald’s PR/’reportage’. ‘ — but that was without knowing how Ms Glucina had [apparently] posed as a PR expert working for the waitress’s employers.

The NZ Herald editor Shayne Currie, no doubt stung by criticism of his paper and its ethical standards in using such tactics, rushed to defend the paper’s reputation – and incidentally, Ms Glucina’s integrity.

He ‘issued a statement’ on the matter. Here it is in reporter Dylan Moran’s email in box timed 10.08am … 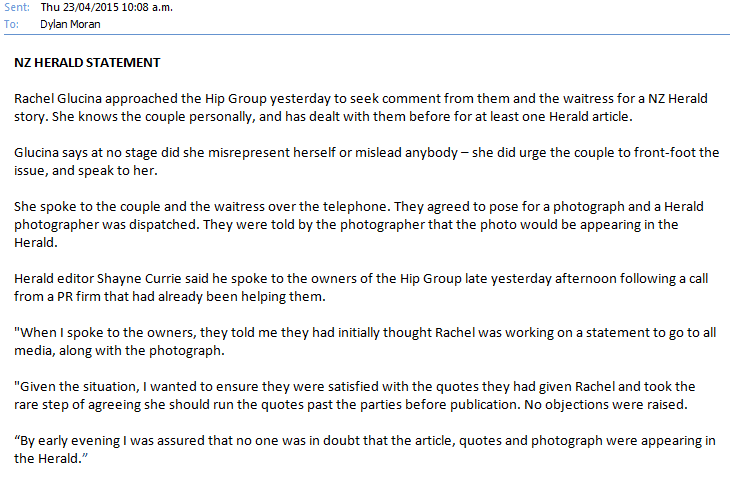 That was apparently also posted to the bottom of Ms Glucina’s article. Political academic and information hoarder extraordinaire Bryce Edwards tweeted that the statement had been published there, but following his link to the story, I and many others were mystified: not there. 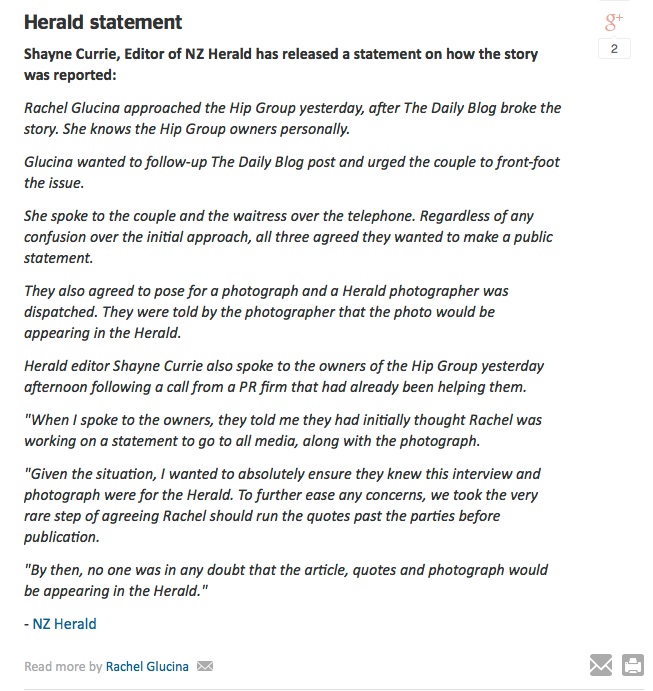 At 11.59am Newstalk ZB had posted the original statement, based on the one emailed to Dylan Moran. It contrasted quite heavily with the ‘final’ version. Until later, at 3.33pm, when Newstalk ZB changed its story to carry the updated version. Bizarre. *

Anyway, I did a comparison between the 10.08 statement and what appeared at the NZ Herald website by 12.10. The amendments, and particularly the deletions – including the aforementioned defence of Ms Glucina’s integrity – made for interesting reading.

See what you think: 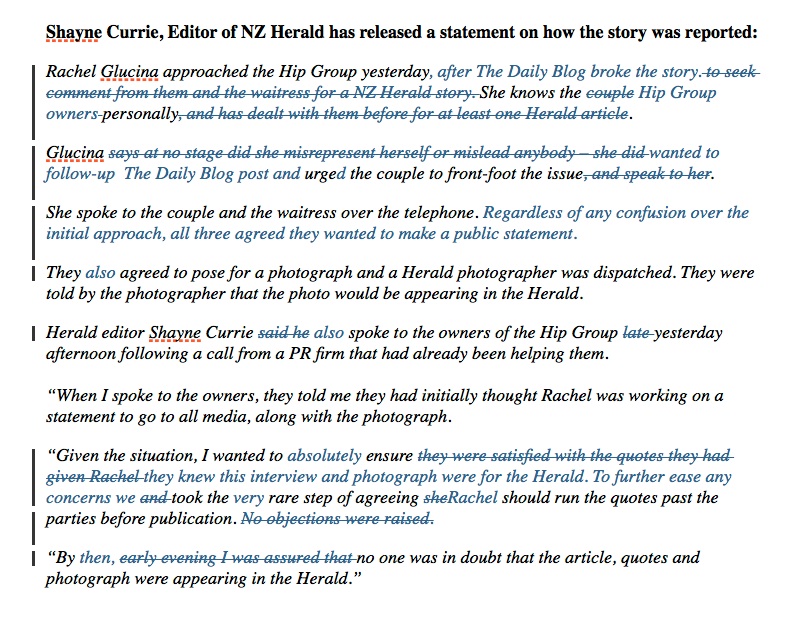 One last thing: I’d like to applaud Radio NZ’s political editor Brent Edwards (@rnzgallerybrent) for a series of statements about this matter that he published on Twitter last night — which you can read at the storify website, or here it is as a one page PDF, courtesy of DevonThink Pro. Well said Brent. 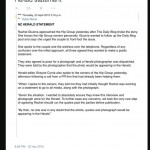 * Update: and equally bizarre, Dylan has apparently deleted his tweet with the 10.08am statement and tweeted the ‘approved version’. (Archived, of course, see right).

Update 2: Here, via the Guardian’s Elle Hunt, is NZ Herald editor Shayne Currie’s memo to staff. This is the only version of the memo that’s come to light so far.

You’ll all be aware of the media/social media storm around our front-page lead article this morning.
Essentially it boils down to the initial approach to the restaurant owners and their discussions with the writer.
Our writer says she was clear she was going to them on the basis of speaking to the NZ Herald; the owners believed she was coming from a PR perspective, and that they would work together on a media-wide statement and image.
By late-afterooon there was no doubt it was for the Herald – Rachel Glucina had cleared up the confusion to the extent that the PR firm, who actualty were acting for the couple, contacted me with concerns about that initial approach.
Also, our photographer who was assigned to the job identified himself as being from the NZ Herald.
After I heard the PR firm’s concerns, I asked to speak to the couple myself to hear their side of the story.
I was personally satisfied, at the conclusion of that call, that there had been no deliberate attempt to mislead them. And that they had Indeed agreed – all three of them – to making a publlc statement and agreeing to a photograph (whether to the Herald, or media-wide).
To further ensure all parties were satisfied, I made the very rare call of allowing the interview quotes (not the story) to be run by the parties. No objections were raised and so I was happy that the parties were satisfied.
Around 10.30 last night I tweeted that we had an exclusive interview with the waitress and that she was explaining why she went public. Some 40 minutes later, we were contacted by Martyn Bradbury – well after the paper had gone to press.
Let me please assure everyone the Herald’s integrity and the integrity of our journalism is of the utmost importance. We must always identify oursetves as reporters/writers/journalists for the Herald at the beginning of any interview.
The chapel has asked that I express my commitment to this ethical point by reasserting that PR is kept separate from journalism in the Herald, especially in the paper’s news sections.
I would hope that this goes without saying – but I do indeed and, of course, give you that assurance. 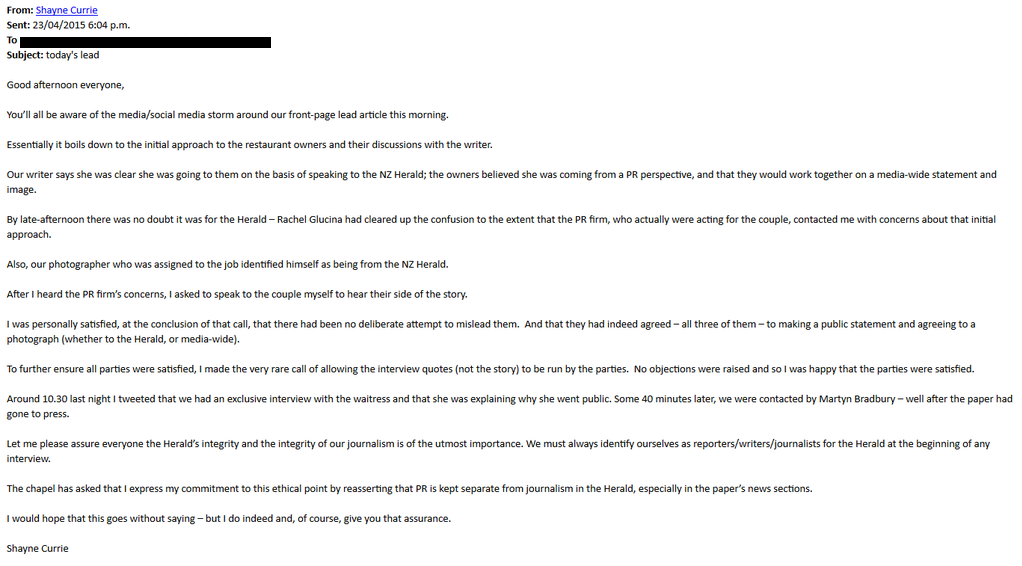