« Ace communicator or duplicitous spruiker? (VIDEO)
Keith Olbermann: ‘My Father Asked Me To Kill Him’ (VIDEO) »

Where the slippery slope of deception ends … 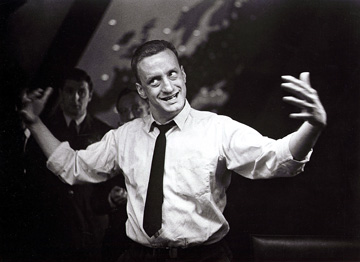 A scandal is whipping through the internet about a tech reporter/blogger called Randall C. Kennedy who “invented” an alter-ego as an “expert” source for info about a speciality area of computing. He even posed as his fake self when giving interviews to other reporters!

One of the more interesting people I’ve talked with in the last two years is a figment of his own imagination.

“Craig Barth,” the chief technology officer of Florida-based Devil Mountain Software, a company that makes and markets Windows performance metrics software, is, I have discovered, nobody. He doesn’t exist.

Barth is, in fact, a nom de plume, which is a fancy, French way of saying “alias.” The real man behind the curtain is Randall C. Kennedy, a popular, sometimes outrageous blogger for and frequent contributor to InfoWorld, a publication that like Computerworld is part of IDG. Kennedy’s connection to InfoWorld was severed on Friday.

It’s a piece worth reading in its entirety, and a few key points about lies are well made:

But on Friday, after I confronted Barth with evidence that linked him to Kennedy — I didn’t yet know they were one and the same — he assured me that although the two had worked together in the past, and in fact, now worked together at Devil Mountain, any allegations that he and Kennedy were the same person were ridiculous. Two hours later, I received an e-mail from Kennedy, who I’d e-mailed separately.

“Time to level with you,” Kennedy wrote. “The individual Craig Barth doesn’t exist. It’s a pseudonym I created a decade ago while writing news copy for Windows NT Magazine. … “What began as a simple e-mail exchange of benchmark data two years ago snowballed, as all such white lies tend to do, into the mess we have today,” he [Kennedy] added.

“Lie” it is, “white” it’s not. And “mess” doesn’t begin to describe the fall-out over Kennedy’s disguising his identity to InfoWorld, Computerworld, and other news organizations and blogs, including the Associated Press, WindowsITPro, and Gizmodo.

During every interview with Barth since late 2007, I came away convinced he knew what he was talking about. On Friday, Kennedy claimed that everything but his identity was legit … Obviously, that’s moot now. Readers who scoffed at the data he presented last week have all that much more reason to doubt. Even people who accepted the data as valid, like me, have to wonder where the slippery slope of deception ends.

Yes, it’s like that with liars. Sometimes even when cornered and confronted with the evidence of their wrongdoing or falsehoods they will deny it to your face. Holding them to the light (not in a religious sense) is your only weapon.

Behind their liar’s mask they are sometimes desperately, feverishly looking for a way out, an angle, a counter-attack, a perceived weakness of yours they think they can exploit.

Compulsive liars all get caught out, eventually. The charade ends. After a struggle, sometimes, they collapse. But if you’re near them, watch them carefully….

They will look for allies, people who are still under their spell, and mercilessly exploit their naivete. If they can, they will use these acolytes to shore up even more defence, just like a mineshaft in danger of collapse. If the liar can convince their supporters that the liar himself is the victim or suffering some “injustice”, thus whipping up a sense of outrage, all the better for the liar.

But in their decline, following the downward spiral, the liar will sometimes kick-and-scream in a last wild effort to avoid exposure (in their ‘death-throes‘, really). They may thrash about, expelling the bitter sputum of their life of lies — impugning the motives and character of their accusers, trying to smear their exposers: attack-as-the-best-form-of-defence.

The liar’s last howl of anguish can be an all-out attack on those who exposed him, those who burst his deceptive balloon. There can be a very nasty sting in the tail.

Just remember: Lying is what they’re good at. It’s their winning formula. They’ll keep doing it. Just not to you.

But what makes this delicious is that the “source” for this information was egotistical evil maniac Randall Kennedy, and I want to be clear about this description here, because calling him this makes other egoists, evil people, and maniacs look bad by comparison. Put simply, Kennedy is one of the craziest guys I’ve ever met and I state that with no sense of humor at all; the guy is nuts. Like, actually crazy.