« “Silence is consent … I refuse to consent.”
“it’s no surprise that no one wants to be known as a cult” » 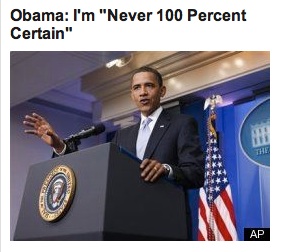 There are two aspects of this job that I think are relevant to this discussion. One is that if the problem has a clear solution, then it doesn’t land on my desk. Somebody else has solved it.
So the only things I’m deciding on are things that are tough.

And the second and related point is that because these are tough questions, you are always dealing to some degree with probabilities. You’re never 100 percent certain that the course of action you’re choosing is going to work. What you can have confidence in is that the probability of it working is higher than the other options available to you. But that still leaves some uncertainty, which I think can be stressful, and that’s part of the reason why it’s so important to be willing to constantly re-evaluate decisions based on new information.

Similarly, John Maynard Keynes said it this way when accused of inconsistency:

When the facts change, I change my mind.
What do you do, sir?

For my own part, as strongly as I express some opinions, I am open to being shown/persuaded I’m mistaken or have missed some important aspect — to re-evaluate. At least I try to stay open. (I’m not, however, ahem comparing myself to Obama.)

A certain awkwardness marks the use of borrowed thoughts;
but as soon as we have learned what to do with them, they become our own.
— Ralph Waldo Emerson

Your thoughts, anyone? – P