« Nice work – How to speak New Zillund at the Rugby
Polygamy Porter. Why have just one! »

Congratulations to Labour MP Trevor Mallard for good-naturedly wiping the smirk off Cameron Slater’s face. Well, temporarily. The result of the much-hyped (on Cameron’s part) 60 km bike race held this afternoon around Bucklands Beach was: Mallard won easily … by more than 20 minutes.

I dropped over to Musick Point this afternoon and met Cam’s sponsor Cathy Odgers/Cactus Kate at the start-finish line (she’s bankrolled his losing bet and now owes the Labour Party $1,000 … which she says she’ll pay in CASH.)

Cathy’s estimate that her man was half a lap behind Trevor proved roughly right. Mallard cruised in just before 3:50 pm, stopped for a chat and quick debrief with his on-loan bike technician Paul from Prestige Cycle Repairs and headed back to meet up with Cam (a loooong-way-back) and cycled back to the finish with him at 4:11 pm. 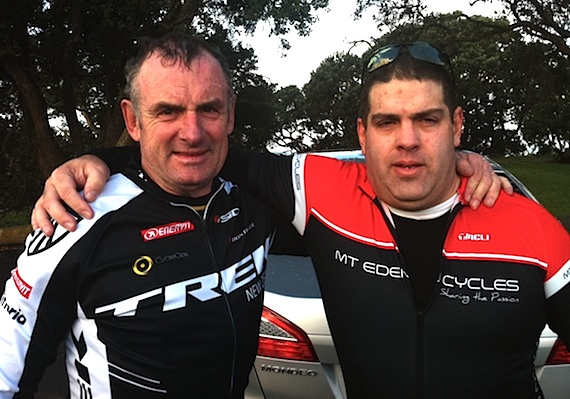 Mallard wins the race in the real world. Slater simply not fast enough to live up to his own trash-talk. (Pic: Peter Aranyi)

You might have thought someone who has relentlessly hyped up the contest with extravagant insults and trash-talk … and even blogged yesterday:

Yep, I am going to kick his arse tomorrow.

… and then had his own arse comprehensively kicked LOST by such a convincing margin — would be a tad circumspect. Not Cam. Of course not!

What need does such a blogger have for reality? He’s already trotted out the revisionist goalpost-shifting fooling-no-one-but-one-eyed-Tories platitude: ‘At least I’ve distracted Labour’s campaign manager in the lead-up to the election’. Of course you have, Cam. Riiiight. All part of the master plan. (Cough)

Sport was the winner on the day. Both cyclists benefitted from focussed training. It’s helped Trevor’s rehab/recovery from an accident in March in which he fractured his femur and shoulder (he told me he can actually cycle better than he can walk at present) and Cam unquestionably got fitter, losing weight (15 kg, he says) and knocking off some prescription drugs.

I can’t help thinking if the result went the other way we would NEVER hear the end of it. No-one likes losing, and as it is, Cam found the grace to congratulate Trevor:

Con­grat­u­la­tions Trevor, you rode well, and thank you for the challenge.

Congratulations to them both. But Mallard won.

From my observations, Cameron Slater’s blog seems to indulge in, provoke and attract a pretty vile level of personal abuse and character attacks on Labour/left-wing figures. That seems unlikely to change, although surely even Cam couldn’t help but be impressed with Trevor Mallard’s sportsmanship and well-rounded humanity this afternoon.

* Headline is a homage to sports journalists I have worked with.