Here’s a very worthwhile article with valuable tips on writing (check the comments stream for more!) It’s by Steve Silberman who wrote The Geek Syndrome for Wired magazine, which we discussed in passing in 2009. Anyway…

… I’m finally writing a book of my own.
The subject of my book is autism, the variety of human cognitive styles, and the rise of the neurodiversity movement. The seed of the project was an article I wrote for Wired in 2001 called “The Geek Syndrome” about autism and Asperger syndrome in high-tech communities like Silicon Valley. I’m happy and humbled to say that it was an influential article, and I still get email about it from the families of kids on the spectrum and from autistic people themselves, though it was published more than a decade ago. — Steve Silberman

Man, I’ll read his book! In the meantime, read his article,  Practical Tips on Writing a Book from 23 Brilliant Authors if you care… 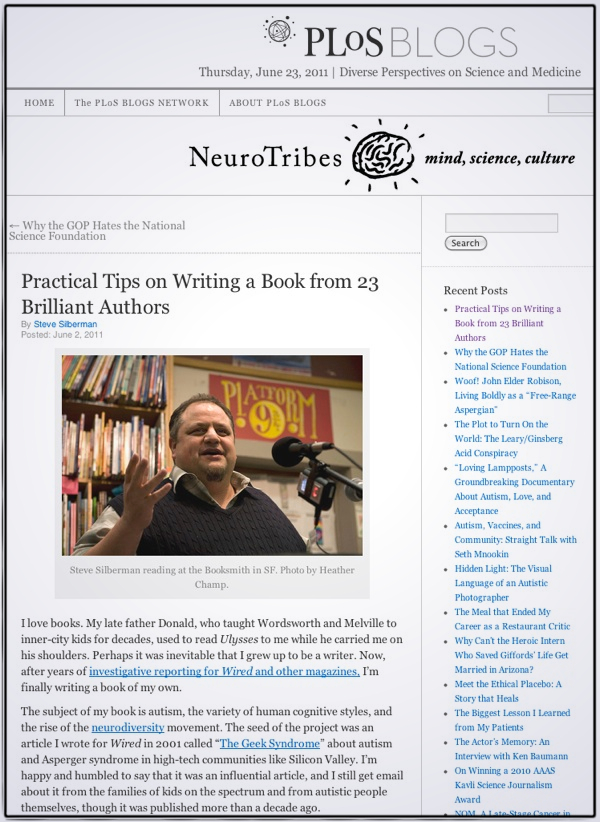 I recently sent email to the authors in my social network and asked them, “What do you wish you’d known about the process of writing a book that you didn’t know before you did it?”….

…A few things became clear as soon as their replies came in. First of all, I’ll have to throttle back my use of Twitter and Facebook to get this writing done (and I may never rev up my idle Quora account after all.) Secondly, scheduling intervals of regular exercise and renewal amid the hours of writing will be essential. And thirdly, I’ll certainly be buying and downloading a software program called Scrivener, which is a powerful word processor specifically designed for writing books and keeping vast amounts of related data in good order.

Amen to Scrivener. Brilliant tool. I can’t recommend it highly enough for long form writing and projects that are growing and evolving. (And they’ve got a Windows beta out now — which is a development since we last discussed Scrivener.) DEVONThink gets a plug in the comments.