« The Internet, Robin Hood, and his Merry Men
How to protect yourself from extortion: Er, live a ‘clean’ life »

Credibility, celebrity and their effects… 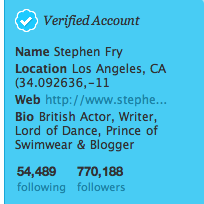 A book of short stories has leaped up Amazon’s book charts to become second only to Dan Brown after Stephen Fry endorsed it on his Twitter feed.
Early today (10th September), the actor told his near-750,000 followers: “You will not read a more dazzling book this year than David Eagleman’s Sum. If you read it and aren’t enchanted I will eat 40 hats.” The book subsequently rose by nearly 250,000% in the Movers & Shakers list.

Does anyone suspect Fry gets an ‘affiliate’-type kickback for his recommendation?
I certainly don’t. I think his endorsement is based on his honest opinion. (Unlike some of the breathless pitches spread around by shameless hucksters as part of their apprenticeship to various “internet marketing” travelling circuses.)

I try very hard not to use Twitter for the purpose of plugging anything commercial unless it is an absolutely genuine enthusiasm, a discovery I feel I just have to share. Eagleman’s ‘Sum’ is an example of this and while I am pleased that my tweeting had such a positive effect, I have to confess that the figures are a little alarming. Imagine how many books and manuscripts are on their way to me even as we speak. What have let myself in for now?

Steven Fry’s blog (Well worth reading in full, like anything he writes IMO).

Oh, such are the tribulations of fame!

On a vaguely related note, I recall reading* once that Madonna said if she could buy anything with her millions it would be her privacy. (*It could be apocryphal of course.)

The trouble is, Madonna’s privacy is one bunny that was sacrificed long ago on the altar of the goddess ‘fame’.
Those ‘artists’ seeking superstardom who invite and court interest in themselves as people, then deliberately, well, um expose themselves become, in effect, a commodity in the process. (Remember the deliberate, self-generated publicity storm around Madonna’s book SEX? I wonder if she ever regretted that lapse into pornography. Dunno.)
Fame to the point of becoming an icon, yes … but also a product for sale.

Having made that mad-but-calculated dash for their goal (priorities, people, priorities) they can’t change the ‘rules’ once they’ve made it. ‘You gotta dance with the one what brung you,’ as the saying goes.

It’s the same, to an extent, with Stephen Fry, and his ‘OMG what have I encouraged now?’ thought.
Thankfully, Fry has the intelligence, self-awareness and (most importantly) good humour to recognise that the wounds are self-inflicted, and the baggage comes with the territory.

It was a trade, my dear boy, with costs and benefits.