How to protect yourself from extortion: Er, live a ‘clean’ life

David Letterman, the late night talk show host, said on his show on Thursday that he had been the victim of an extortion attempt over charges of sexual affairs with staff members, claims that he conceded were true.

Mr. Letterman said on ‘The Late Show,’ on CBS, that he had been approached by a person who wanted $2 million not to go public with information that Mr. Letterman had been in sexual relationships with women who work on his show.

Mr. Letterman said that he had testified before a grand jury and had admitted to the relationships. ‘My response to that is, yes I have. Would it be embarrassing if it were made public? Perhaps it would,’ he said on the show. ‘I feel like I need to protect these people. I need to certainly protect my family.’”

This tale of [alleged] extortion recently reminded me of a time when I was warned that someone was “looking for dirt” on me and had probably hired a private detective to follow me and report on my activities and who I met etc.

I laughed. Well good luck to him, I responded. What’s he going to find? I’m not a drug dealer and I don’t have a mistress, so he’ll get bored pretty quickly.

In that situation, it seems the best defence is being unremarkable (at least in certain regards).

They say ‘The best revenge is living well’. And, in my view, living ‘clean’ is part of that. What hooks can a blackmailer get into you if you have no ugly secrets? Exactly.

William Safire, the famed newspaper columnist who died recently had a twist on that:

Writing well is the best revenge. 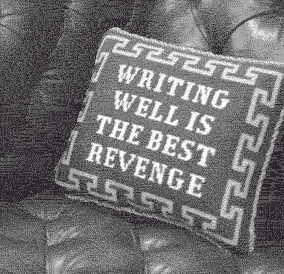 While, sure, I’m occasionally accused of ‘ranting’ or writing ‘purple prose’, I do my best. I liked Safire’s exhortations on clear writing, including his wonderful Rules for Writers, and I admired and was inspired by (and try to emulate) his ‘call-a-spade-a-spade’ approach, as highlighted in his NY Times obituary:

Unlike most Washington columnists who offer judgments with Olympian detachment, Mr. Safire was a pugnacious contrarian who did much of his own reporting, called people liars in print and laced his opinions with outrageous wordplay.

The other thing Safire did was follow up. He kept chasing a story with longevity of purpose. I like that too. (Fixation, dog-with-a-bone, bee-in-the-bonnet, ‘vendetta’ — call it what you will.)

Last point: Not ALL ‘negative coment’ is bad
An American/Kiwi publisher I know, Andrew, once told me that people scoping him out as a prospective business associate were very happy to have found some ‘derog‘ (derogatory comment) about him on the internet. They said it was because that indicated he was a real person with a track record. (I’m sure they also looked at the content of the negative stuff and its source and made their own judgement.)

I have the same view. Some of the spittle-flecked bile and rubbish that’s been written about me by certain nobodies does me no harm whatsoever. Referring to a warm puddle of such comment, an erudite observer once commented that ‘Some idiots will be fooled by this’. Nicely put.