« A denial and a clarification … well, not really
Celebrating quirkiness »

The worst stuff isn’t even in there?

Wow, I thought the ‘It came from Wasilia’ profile on Sarah Palin by Todd Purdue was eye-opening. She also came off pretty badly in that book I hoovered up over a wet weekend Race of a Lifetime … but read this piece from the current Vanity Fair – ‘Sarah Palin: the Sound and the Fury’. 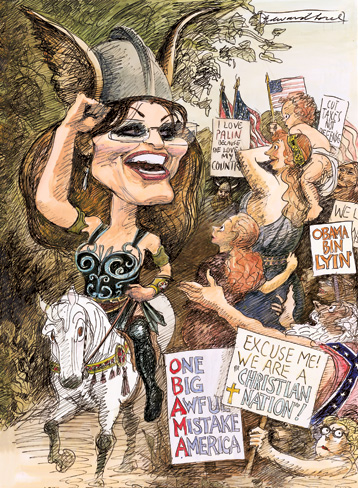 The writer has already come in for attack for his account (what’s new?) and said, that as a Christian who really tried to keep an open mind about Pailn, figuring she’d had a bum ride with the media, he was shocked at the repeated and confirming testimony from people/witnesses who described how she has operated.

Michael Joseph Gross said on “Morning Joe” Thursday. “I couldn’t believe these stories either when I first heard them, and I started this story with a prejudice in her favor.

I have a lot in common with this woman. I’m a small-town person, I’m a Christian, I think that a lot of her criticisms of the media actually have something to them. And I think she got a bum ride, but everybody close to her tells the same story.”

In the profile, Gross paints Palin as an abusive, retaliatory figure with an extreme ability to lie. “This is a person for whom there is no topic too small to lie about,” he said. “She lies about everything.” — Huffington Post

Other quotes from the profile:

There’s a long and detailed version of what they had to say, but there’s also a short and simple one: anywhere you peel back the skin of Sarah Palin’s life, a sad and moldering strangeness lies beneath.

Interesting comment about her ‘team’ protecting her from criticism and questions on a ‘Conservatives4Pailn’ discussion forum:

On C4P, any journalist or public figure who questions Palin in any way is flicked off as a “creep,” a “hack,” a “loser,” a “storm trooper,” a “liar,” or as just plain “slime.” “I assumed the governor was above that,” says Jay Ramras, an Alaska state legislator who has been a frequent target of the site. “Or at least that there was a Chinese wall between her and these people. But then they crossed over—she hired them.”

Hard on the heels of Roger Ebert’s very thoughtful piece, it is worth reading this fascinating profile for yourself.

To me, it shows how sometimes people claiming virtue from whatever source (religion, the Constitution, principles of the ‘Founding Fathers’ etc)  can actually be …. not what they seem.

Read it at Vanity Fair. Looooong, naturally for VF, but totally worth it. I gasped.