The truth can be harsh

Respected business journalist/commentator Rod Oram’s assessment of the collapse of the HUGE South Canterbury Finance and supremo Allan Hubbard’s role in the demise is less confrontational than Bernard Hickey’s Please say sorry and thanks ‘open letter’ piece — but in its way, just as scathing. 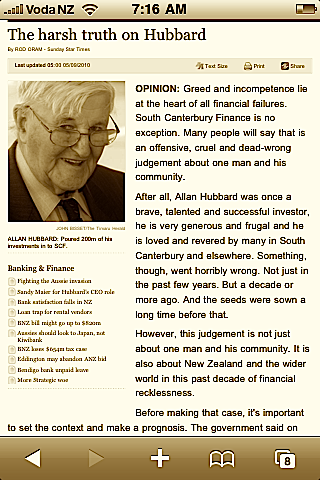 Ask Allan Hubbard if he thinks 'ALL publicity is good publicity'. It's not really true, is it?

Failing to respond to criticism has become one of the themes of this blog, and Allan Hubbard’s story could serve as a salutary lesson (yes, I know that’s a ciché) to those whose response to awkward questions is to pull up the drawbridge.

As I said earlier, I don’t know enough to make a judgement about Allan Hubbard — and anyone who has been in a financially tight situation, with cash flows turning against you and pressure building MUST sympathise with the circumstances he found himself in and the heavy personal cost. I certainly wish him no ill.

Hubbard was chairman of South Canterbury Finance until earlier this year; his board was small and made up of local business partners and friends; a high proportion of its lending was to related parties; its auditor was a tiny Timaru accounting firm and its trustee was Hubbard’s second employer as a young man.

Hubbard’s fierce loyalists say that’s how business is done locally. Sadly, that’s true. That might be OK for a small business owner when he’s on personal terms with all his lenders and borrowers.

But it was no way to run South Canterbury Finance, even back in 2000 when it had only $400m of assets. And once it began soon after to aggressively drum up deposits [Comment: SPRUIKING, in other words?] and seek ever-riskier investments, it started down the slippery slope to failure.

Why wouldn’t he accept offers from some others of common sense and better governance and management? People who tried said he wouldn’t accept their advice.

And Bernard Hickey is back with more saying in Signs of SFC’s failure for all to see in the NZ Herald ‘…there were seven signals evident in recent years that New Zealand’s largest independent finance company was headed for the rocks’.
Including this:

Refusal to talk: Owner and driving force Allan Hubbard refused to talk in any substantial way to the media. This was also the case with Rod Petricevic, Mark Hotchin and others who did not like the scrutiny and awkward questions.