« What is it about TVNZ Breakfast?
Calling all gullible gamblers! »

The iPhone is not logging your location 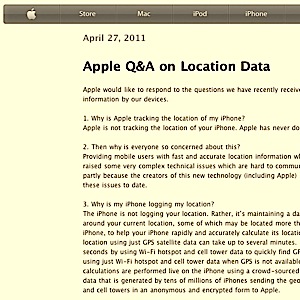 Apple replies. Not location data but 'database of wifi hotspots and cell towers up to 100 miles from your current location'. Makes more sense. (click)

Read this if you cared…

3. Why is my iPhone logging my location?
The iPhone is not logging your location. Rather, it’s maintaining a database of Wi-Fi hotspots and cell towers around your current location, some of which may be located more than one hundred miles away from your iPhone, to help your iPhone rapidly and accurately calculate its location when requested.

So, a bit of clarification and a software update ahead to squish the ‘keeping a year’s data’ “bug”. I don’t know if this will end the apparent hysteria.

So, leaving aside the cheap semantics lesson (Q: How is a database of ‘wifi hotspots and cell towers near your current location’ very different from ‘your current location’? A: Not very.) … it’s interesting (to me) how long Apple chose to take to reply to the ‘mounting pressure’ — leaving many in the media (mainstream and blogosphere) stewing in their own imagination.

It’s tricky reporting on this kind of stuff, and easy to be swept along by the apparent story, citing claims and analysis by people, like Privacy groups, with noble intentions but not necessarily the true picture.

Apple’s delay in responding let that news cycle run wild over the Easter break. Any real brand or PR harm to them? Dunno.
– P