Despite that, your honour, I wasn’t ACTUALLY there 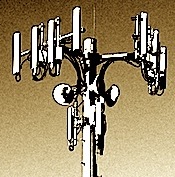 A few years back, if I recall correctly, a man was convicted for stabbing a woman in Fort St, downtown Auckland. He had an alibi that placed him somewhere else — someone who said: ‘He was wiff me, guvnor.’ But the Crown prosecutor produced evidence from a phone company’s cell tower records that showed that someone had made a call on the defendant’s mobile phone in the vicinity of Fort St around the estimated time of the stabbing. Case closed.

The interwebs have been abuzz this week with news that your iPhone keeps a log file of where your cell phone network thinks the phone has been since you turned it on. And (shock, horror) this information is, by default, kept (unencrypted *) on the phone and in the back-up of your iPhone data in iTunes … and is interrogatable. Cool.

Well, I thought so, given these comments from the geeks who discovered the log:

Don’t panic. As we discuss in the video, there’s no immediate harm that would seem to come from the availability of this data. Nor is there evidence to suggest this data is leaving your custody. But why this data is stored and how Apple intends to use it — or not — are important questions that need to be explored.

“It is also entirely conceivable that malicious persons may create viruses to access this data from customers’ iPhones, iPads, and desktop and laptop computers. There are numerous ways in which this information could be abused by criminals and bad actors,” Franken wrote.

I wasn’t worried since, as I told my panelbeater fixing what looked like a bullet-strike (!!) on the door frame of my 528 a while back: ‘I’m not a drug dealer and I don’t have a mistress.’ (I think I might have been suing someone at the time, but, neh …)

So, of course I straightaway downloaded the open source application iPhoneTracker to look at my own data (well, why wouldn’t you?), and here, according to the file, is where my phone and I (apparently) went one day last week: 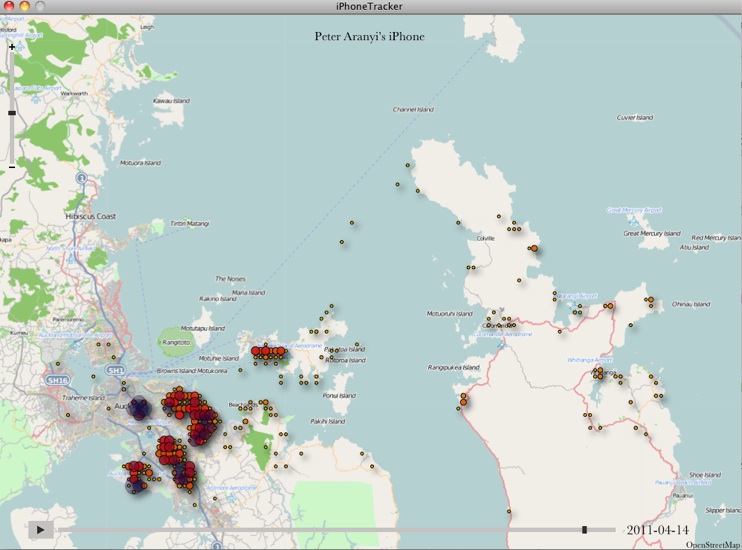 Gee, I don't remember visiting Waiheke and those other islands, nor popping over to the Corromandel Peninsula. Oops. (click to enlarge)

Oh dear. Now I’m worried. The data is not exactly accurate, since I didn’t actually visit Waiheke Island or zoom over to the Corromandel Peninsula that day. Clearly, I would expect the GSM cell phone call data would be more accurate than this … which looks like it’s logging whichever cell tower ‘sniffed’ my phone. But even so … I can see why this could be useful and worth asking for in a search warrant/legal discovery — in some cases, I guess.

If you have an iPhone follow this link to do this for yourself. It was fascinating watching the ‘video’ of my travels since I bought the iPhone … but unlike some suggestions, it only tracked me since I upgraded to the iPhone 4 — my iPhone 3G data (two-and-a-half years’ worth!) didn’t show up since I didn’t upgrade it to iOS4.

Fun times. I guess to the pure, all things are pure. (My standard ‘I am not a saint’ disclaimer applies.)
– P

*Update: Another hero, Andy Ihnatko sees it differently to me, calling it ‘a nervous can of worms’ … but even he says, somewhat contentiously, in Hey, wonderful: there’s a location-tracking file on my iPhone:

It’s pretty much a non-issue if you’ve clicked the ‘Encrypt iPhone Backup’ option in iTunes. Even with physical access to your desktop, a no-goodnik wouldn’t be able to access the logfile.

Sure, but it’s still subpoena-able (is that a word?)