The future of publishing? 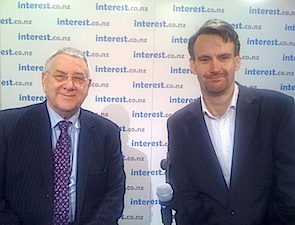 Olly Newland and Bernard Hickey on the set at interest.co.nz (click to watch the interview at ollynewland.co.nz)

I had the pleasure a week or so ago of accompanying one of my authors Olly Newland on a visit to the interest.co.nz offices. The Auckland-based e-publishing business seems like a success story by any measure.

Its nearly ubiquitous host, journalist Bernard Hickey provokes ALL sorts of comment — good and bad — on a regular basis by his sometimes outlandish (and almost always perceived as partisan) statements on various matters financial and investment-related.

Bernard garners bagloads of ‘F R E E’ publicity and branding for interest.co.nz (as well as the revolted discontent of those who see themselves as his rivals) by apparently being ever available to the news media and his almost tireless efforts to seemingly be everywhere and make comment on everything in his niche. It’s paying off, as much as e-publishing can, I think. (I hope it is.) Certainly in terms of ‘positioning’ and ‘mindshare’ in their niche, these guys are tops.

In my observation, a lot of people enjoy a good argument — particularly men who spend much of their time justifying past decisions or denying fault of any type. (ahem) So the interest.co.nz comment stream is one long bunfight of conflicting opinions … particularly after one of Olly’s columns is published there … great!

But the interest.co.nz story is instructive, for all sorts of good reasons. Like most successful publishing ventures, it straddles not a single niche but a range of closely-related niches. It’s a boot-strapped business, with tight budgets and overheads, yet pretty bold and expansionist — almost imperialistic in its outlook. And why not?

I had a really good talk with interest.co.nz owner/supremo David Chaston about this in some detail and out of respect for his willingness to share I won’t divulge the detail of our discussion, nor the facts and figures he kindly gave me to help me understand the model. (I’ve spoken at length with Bernard before and since, and enjoy his company. I don’t agree with him on several important matters, but that doesn’t reduce my respect for him.)

But let me say this: these guys know what they’re doing, they’re not afraid to consciously experiment and correct their actions based on results, and they seem to want to expand their user/customer’s experience and thus, their business’s offerings.

It was illuminating. Thanks boys.