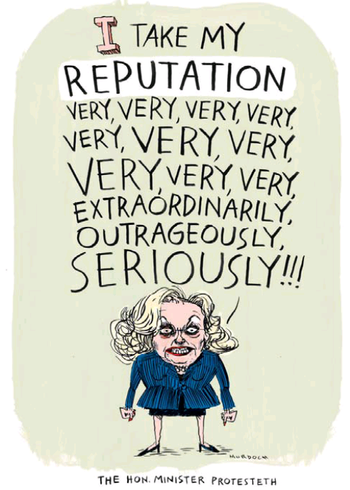 We’re working our way through a tranche of witness transcripts and other evidence which was part of the proceedings of the Chisholm inquiry.

Previous posts on this topic have been:

Mrs Collins in the witness box

Judith Collins’ time as a witness under examination at the Chisholm inquiry into ‘Allegations concerning the Honourable Judith Collins and a former Director of the Serious Fraud Office’ began at 10:25 am on 29 October 2014 and concluded at 6:01 pm that same day.

The redacted transcript makes interesting reading. You can download the whole 145 page document here (PDF 10 MB) along with her 19 page affidavit and other documents linked to her testimony at the foot of this previous post.

“I woke up this morning…”

As noted in an earlier post, one of the ‘surprises’ Lester Chisholm was confronted with was a one-sided lack of records between Slater Jnr and Judith Collins, despite the fact they both reported that they “phoned each other often”.

From reading the discussions between Chisholm and Mrs Collins’s lawyer Francis Cooke, it seems clear –or at least likely– that Mrs Collins was asked if she could offer any explanation for this lacuna. (Lawyers love this word which simply means an ‘unfilled space, gap, or missing portion’ – in this case in the documented narrative.) 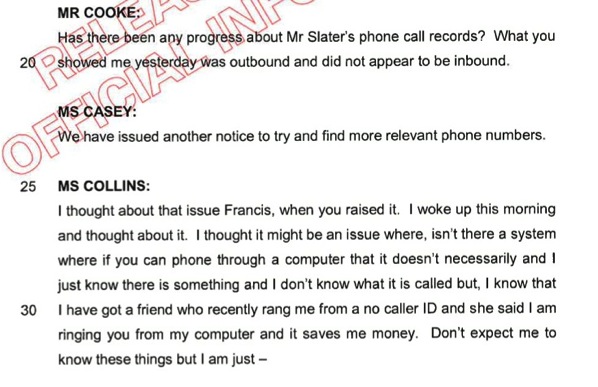 I found Mrs Collins’ suggested ‘explanation’ on page 8 of her witness transcript interesting.

As I’m sure happens to many of us, all the time, she woke up the morning she was to appear before the possibly career-ending inquiry and an explanation occurred to her.

“I woke up this morning and thought about it. I thought it might be an issue where if you can phone through a computer that it doesn’t necessarily – and I don’t just know there is something, and I don’t know what it is called – but, I know that I have got a friend who recently rang me from a no caller ID [number] and she said ‘I am ringing you from my computer and it saves me money’. Don’t expect me to know these things but I am just –”

The transcript seems to stop there, and no comment in response is recorded except for Chisholm saying (page 9), “The analysis has been much slower I am afraid than we had expected…” (see below)

Two things:
(1) Oh really?
(2) In a sworn follow-up statutory declaration Slater Jnr assured the inquiry that he had not used “Skype or any other VOIP service” to communicate with Mrs Collins [see para 117-118 from Chisholm’s inquiry report] – which (at the very least) contradicts Mrs Collins’s early morning ruminations. Dunnit?

Here are the relevant paras from Chisholm’s final report: 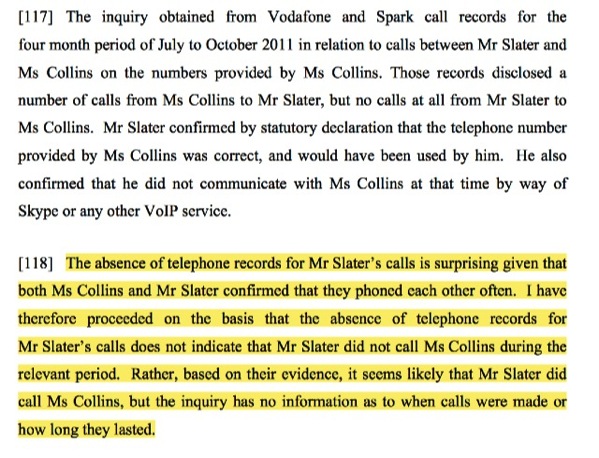 Oh, the stories don’t quite match up. Gee. Who’s right?

And here, in Mrs Collins’ transcript, p9, is Chisholm’s (non)response to her early morning theory, following her VOIP call from her “friend”:

Another rich vein of ‘Things that make me go hmm’ is the thread of discussions at the inquiry relating to government media management – particularly management of matters that might damage the John Key/National Party government’s … reputation.

This is a topic of particular moment given the fact that the whole Chisholm inquiry into ‘Allegations concerning the Honourable Judith Collins and a former Director of the Serious Fraud Office’ can itself be seen to have its genesis in a crisis media management strategy.

By launching the narrowly-constrained inquiry, after requiring Judith Collins’s resignation from Cabinet, John Key kicked into touch the myriad swirling issues arising from the revelations in Nicky Hager’s book Dirty Politics. Just in time for the election. How convenient.

Many of those issues raised by Hager’s book were connected with media management (not a euphemism) and, as mentioned earlier when examining the Maarten Wevers’ notes, it was telling that a large REDACTED section of Wevers’ evidence appeared to be about media management in the Prime Minister’s Office.

Mrs Collins’ press secretary at the time of interest to the inquiry was Stefan Herrick. Herrick appeared before the inquiry – you will see in the Collins transcript that his testimony is referred to –  and his tetchy, at times truculent, uncooperative-in-tone testimony (forgive me Stefan, but that’s how it reads) is included in the tranche of nearly 60 separate documents released to me under the Official Information Act.

Herrick’s 24 page transcript is here (PDF  1.7 MB) And, along with other documents, also in the library of [source docs] I’m making available on DocumentCloud.

One has to admire Mrs Collins’ “Why have a dog and bark yourself?” attitude to dealing with media (as she explained it to the inquiry) espousing her commitment to ‘sticking  to the talking points’ her media handler (Stefan) had prepared for her. 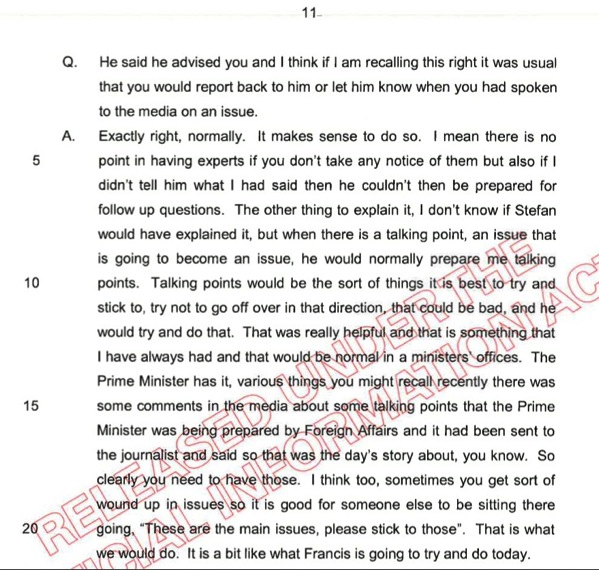 Later on, page 32, we the public, who paid for this inquiry (just like the flag referendum) appear to have missed out on a lesson about ‘the politics’ of managing a PR crisis. REDACTED! Drat! 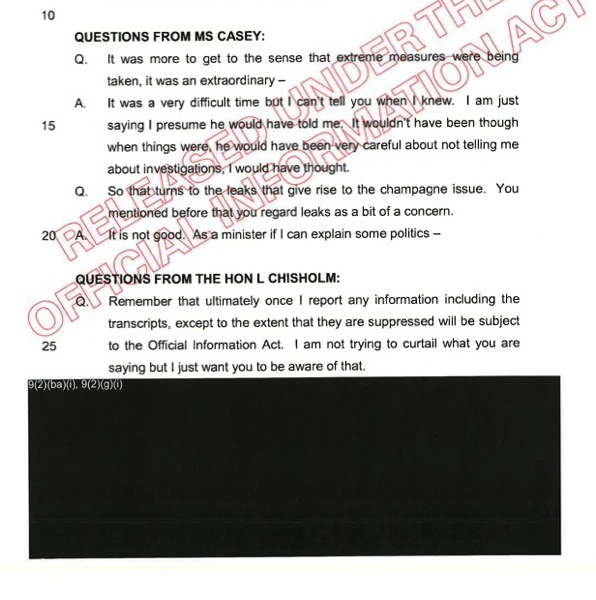 “As a minister if I can explain some politics” Mrs Collins offers. But then that’s REDACTED. Oh dear. Pity. I bet there were rily good reasons, eh? 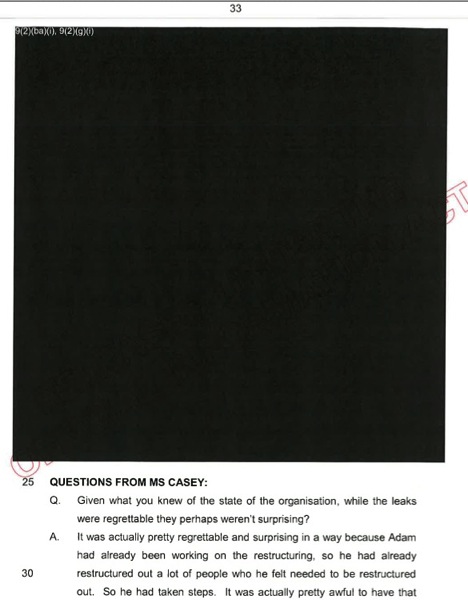 Pages 34-35, we find that Mrs Collins prefers to ‘work with’ journalists she knows, like, you know, the press gallery. Cosy. So poor Jared Savage? Hmmm. We’ll get to him another time. 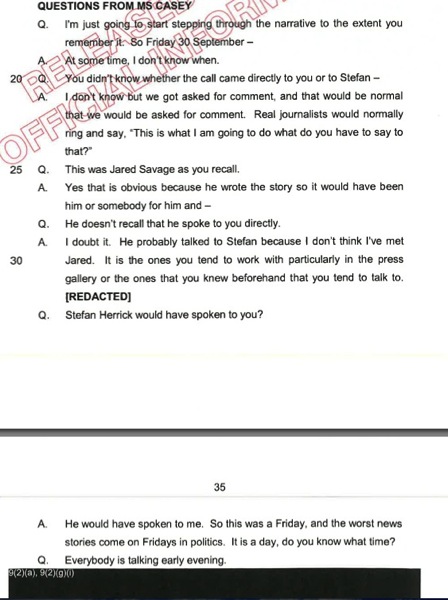 “It is the ones you tend to work with particularly in the press gallery… you tend to talk to.” Uh huh. Oh, and then more REDACTED.

Here’s the basis of Issac Davison’s story in the NZ Herald about the PR ‘disaster’ for Mrs Collins that the smear campaign against Adam Feeley represented. (Oops, sorry. Did I say smear campaign? I meant the ‘media re-balancing’ effort on behalf of Mark Hotchin, which we now know was being orchestrated – for hire – by Carrick Graham, Cathy Odgers and Slater Jnr. Sooo different.) 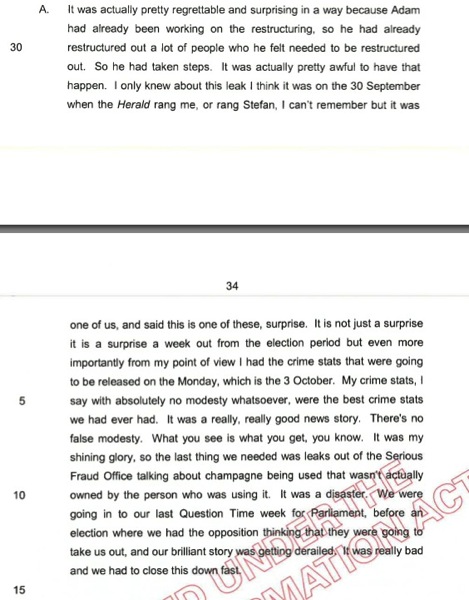 “My crime stats…were the best crime stats we had ever had.” “…my shining glory.”

This section (above) where Mrs Collins reveals her perspective: that a distraction from the “really, really good news story” of her “shining glory” of crime stats was “an utter disaster”. I find that fascinating. Shallow, but fascinating.
Interesting perspective you have there, Mrs Collins. 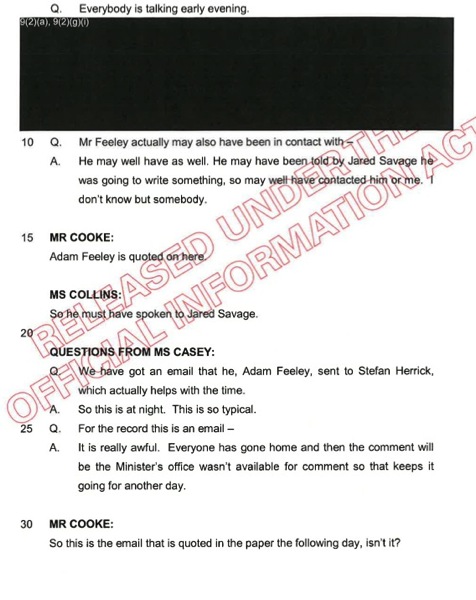 And more of the same. “This is so typical,” Mrs Collins told the inquiry, referring to Jared Savage emailing her flack Stefan Herrick on Friday night. “It is really awful. Everyone has gone home and them the comment will be the Minister’s office wasn’t available for comment so that keeps it going for another day.”

Gee, I don’t know about you, but that sounds pretty small-minded to me. And jeez, talk about siege-mentality.

We know Mrs Collins cares about her reputation (because she told us – see Sharon Murdoch, above) but this transcript reveals (and, most likely, would reveal even more under the black boxes and redactions) how thin-skinned and media-obsessed a government minister’s office can be.
I found that sad, frankly.

Here’s more from p37 and following: 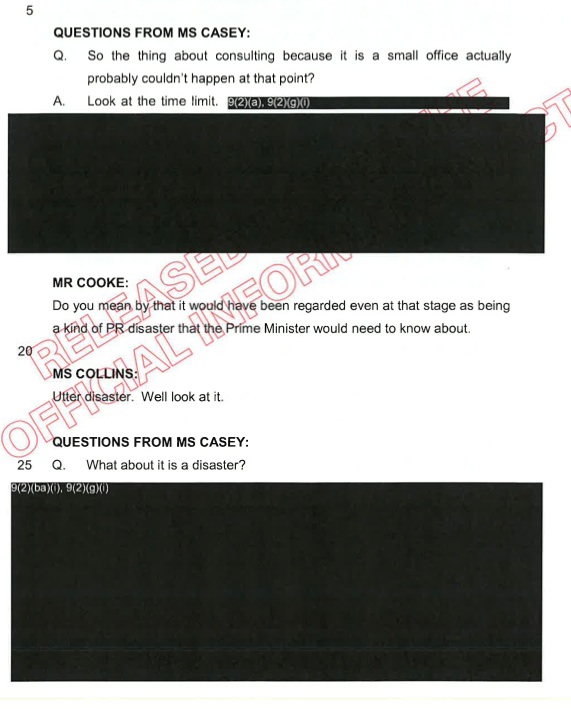 “What about it is a disaster?” Mrs Collins is asked. And her answer is REDACTED. Hmm. 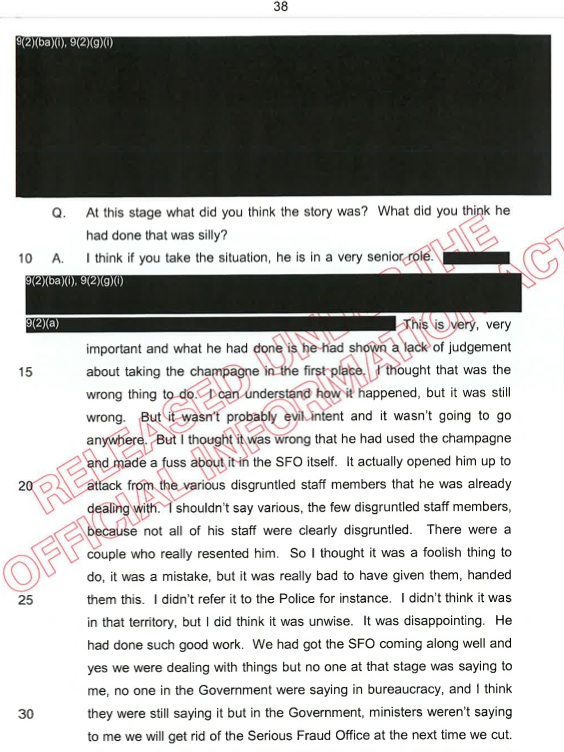 Things get intriguing on page 40 when we see that the identity of someone/someone’s office who appears to advise Mrs Collins on media crisis management has been quietly REDACTED from the transcript. It’s not PM John Key or his kneecapper, the Peter Pan-esque Wayne Eagleson, because they’re mentioned. So who? Why? 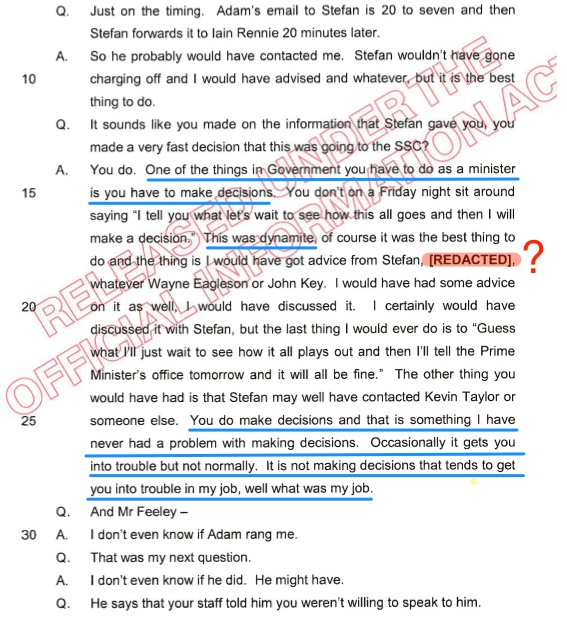 As well as the subtle REDACTION (about which we can only wonder), it is again *fascinating* to see how Mrs Collins’ view of herself echoes that of George W Bush – “I make the decisions.”

Have a read through the documents for yourself, and see what you think.
Comments or questions welcome.
More to follow.

This post was updated to insert further extracts from the Judith Collins transcript, and to add this:

Postscript: I sometimes find it useful to take a helicopter view of a document released with redactions under the Official Information Act. Here’s such an overview of the Collins transcript showing the redactions in context. Interesting, eh? 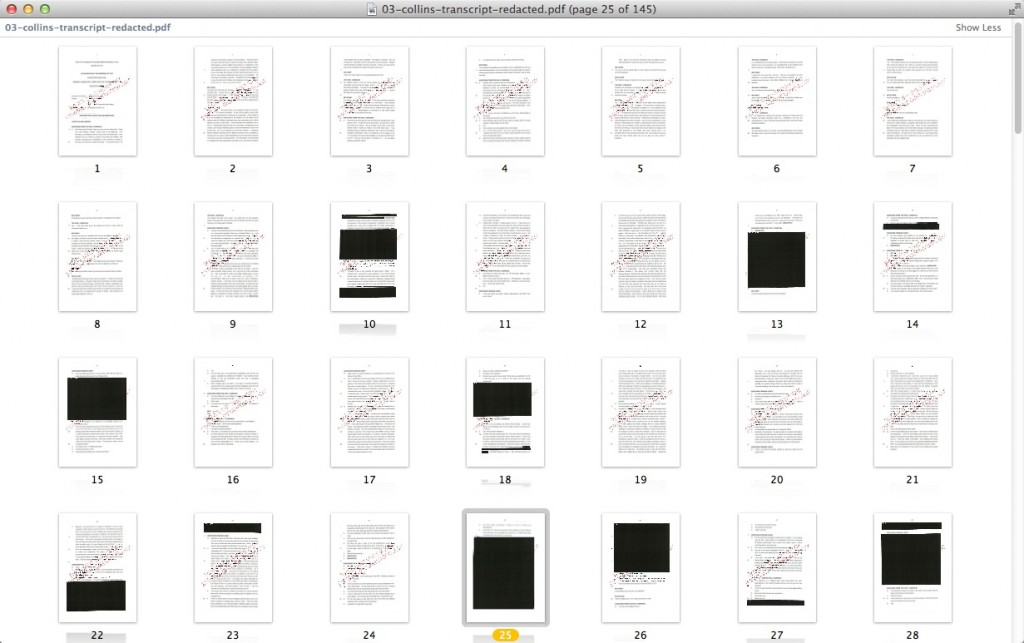 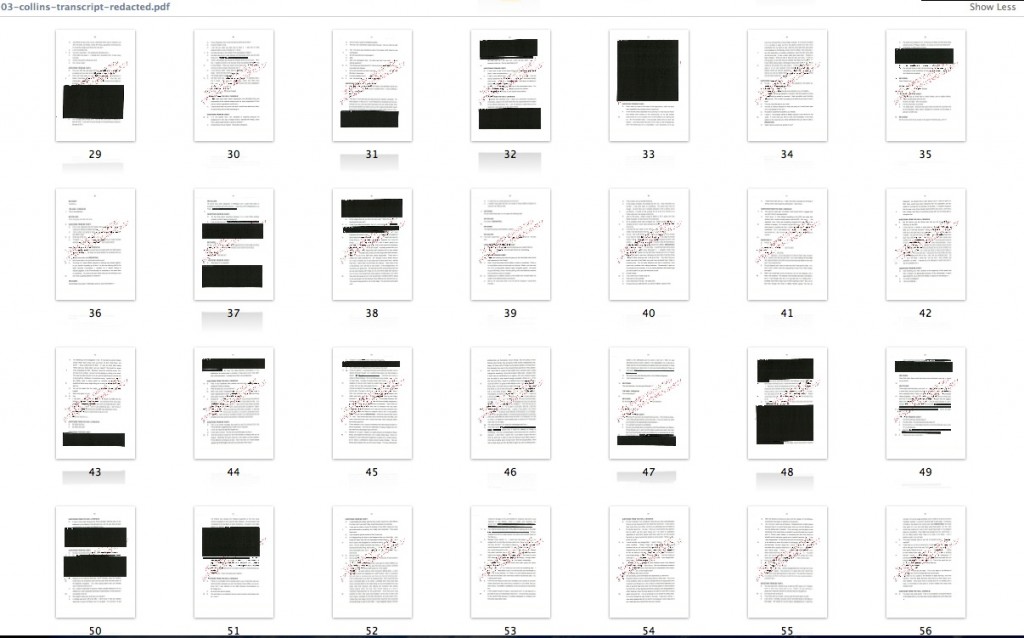 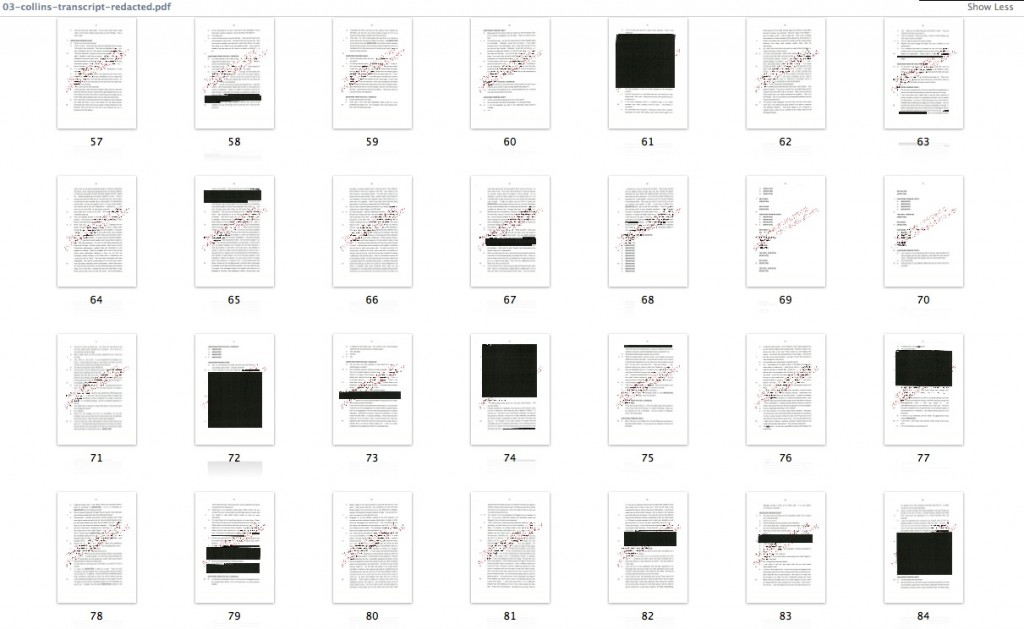 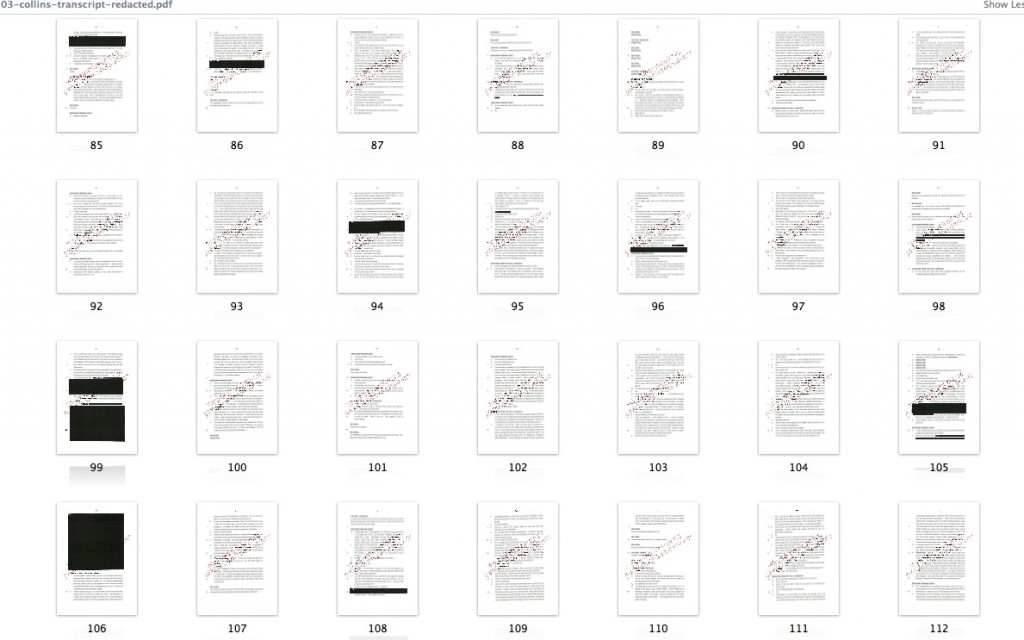 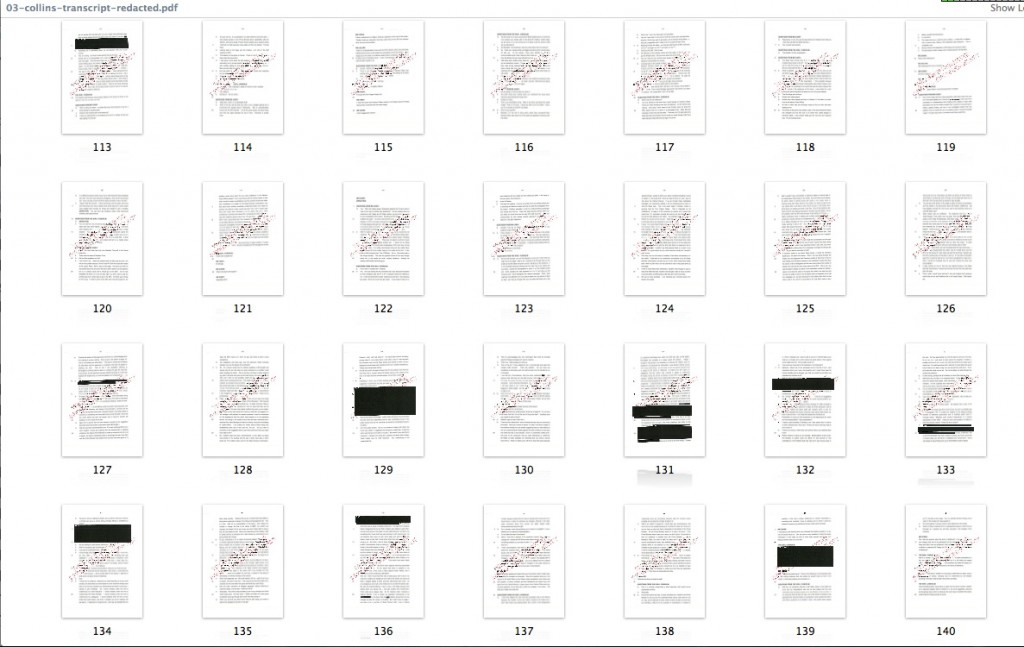