Hunting for a word 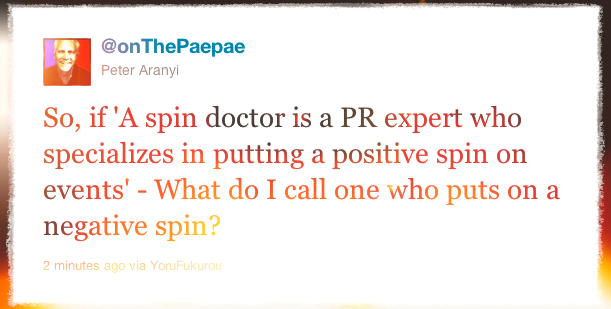 I mentioned in my earlier post about ‘Black hat’ techniques that

The definition I quoted in the tweet above is from wisegeek.com … whose entry is instructive:

The term spin doctor became a common addition to our language in the 1980s. Its exact origin is uncertain, but spin doctor is often used to describe public relations experts as well as political or corporate representatives whose job it is to put a ‘positive spin’ on events or situations. The verb spin doctoring is also commonly used to describe the work of a spin doctor.

If we control the spin, or direction, of an object, we are showing sides of it we want to show while not shedding light on the rest. A spin doctor uses spin control to emphasize or exaggerate the most positive aspect of something. For example, cigarette companies sell products known to be harmful, which can make them look bad. However, if they also provide funding for charitable events, or build community playgrounds, this can make them look good. Such examples of ‘corporate social responsibility’ give corporate spin doctors positive aspects of the cigarette company to promote to the public through the media.

Some public relations firms list spindoctoring outright as one of the services they offer, while others use terms such as “transformation strategy” or “image transformation.” This is comparable to the “rebranding” that is done with products that are not selling well in order to sell them. Companies and political organizations also need a spin doctor to ‘sell’ their mission and ideas to the public. For example, when the US Department of Homeland Security, which was created after the events of 11 September 2001, was not receiving as much positive public reaction as originally hoped, the same corporate branders behind the FedEx name were hired to revamp the department.

Spin doctoring is not propaganda. Propaganda campaigns do not simply seek to convince through rebranding by a spin doctor, but add the deceptive element of “psychological warfare.” Black propaganda is propaganda that is made to look like it came from the enemy and so protects its sources if and when the lie ever becomes exposed. Grey propaganda occurs when the true source is omitted as in the example of Radio Free Europe. Radio Free Europe was introduced to the public as a platform run by free democratic voices against communist propaganda and people believed that. New Jersey senator Clifford P. Case later admitted Radio Free Europe was actually a propaganda program run by the CIA.

A spin doctor must keep track of all publicity, such as newspaper articles, of the organization he or she is representing. Information about public trends and perceptions is helpful to a spin doctor in assessing potential public reaction to an event. Time management is absolutely crucial to a spin doctor as an event must be publicized in a positive way before someone else can get to it first and report any information that the public could consider negative.

All good, but I want something else … in the context of the anti-MMP campaign’s slanted attack ads, I want a word which denotes a negative maligning PR effort, an attempt to frame debate on terms that denigrate the opposing ‘players’ or position.

I’m looking for a label (pejortaive, I don’t care) for the spin equivalent of the ‘politics of personal destruction’ …. like the Karl Rove-esque political attack-ad campaigns, smearing people using ‘guilt by association’ or repeated implications that they’re untrustworthy, incompetent or even treasonous etc.

WHAT do we call that?

UPDATE: Mentioning Karl Rove reminded me of this awesome US political ad.