Excellent article on the blogger claiming rights of a journalist controversy by Rebecca J. Rosen at The Atlantic … 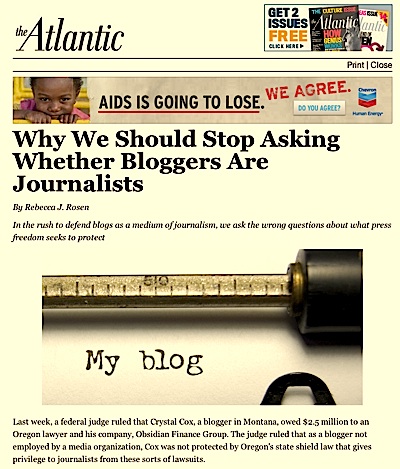 Perceiving attack, the Internet’s collective fur shot up on its back: Do bloggers not merit the same protections as journalists?
Many people have argued that the medium in which you publish should have no bearing as to whether you receive the protection of a state’s shield law (something 39 states and the District of Columbia now have). But this argument answers the wrong question, because we’re not asking the right ones about how we protect the free flow of information — and balance that free flow with other values such as a right to defend oneself in court — in a day when anyone can publish online.

The problem is often framed — wrongly — this way: Do bloggers count as journalists? For example, the New York Times “Room for Debate” feature is titled “Are All Bloggers Journalists?” The description of the online forum asks, “How should judges decide who is protected and who isn’t?” Kelli L. Sager, a First Amendment lawyer participating in the debate, writes, “Because most laws were written before the Internet existed,” she explains, “they often refer to then-existing media — newspapers, magazines and the like — or simply to ‘journalists,’ without defining who is a journalist.” The central framing is always “who is a journalist” — who, who, who. The question of protection always rests on the question of who the person is that is committing the act of journalism. Is this person a journalist?

Seriously, click through and read the article. It’s good.

And so is Russell Brown’s review of some of the issues in the, um, issues paper on new media from the Law Commission: News media meets new media: Privileges and accountabilities