Oops. What? He wants us to LISTEN to the murderous ultra-right nut job? Er, well, gee. OK. 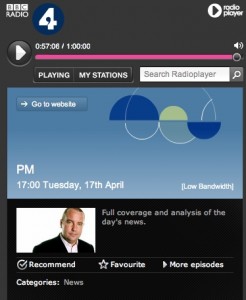 In my experience, sometimes when one is interviewing someone in the news, particularly a LIVE interview, things can take an unexpected turn. Your subject says things that you didn’t expect.

This morning, roused very early by an insistently affectionate cat (still getting over her spell in the cattery while we were at the beach last week) I tuned into BBC Radio 4’s PM programme and heard Eddie Mair’s interview with a Norwegian clinical psychologist Dr Roderick Orner about the 30 page ‘manifesto’ Anders Behring Breivik, the ‘ultra-right wing Nationalist’ who has admitted killing 77 people, presented to his trial.

Eddie, I think, had been expecting a ‘How is this guy insane? Let me count the ways’ track from the psychologist, but listen as he’s given a short course in the need to engage in debate with even those we characterize as ‘hateful extremists’ as part of our commitment to democracy. (This was the very same point I tried to make to Martyn Bradbury here: ‘On a collision course‘.)

“We should be very cautious about labeling things. We should be listen very carefully to what he says and not think of it as a man who is mentally ill who speaks. This is a man who is now the voice of the extreme right, of extreme ultra-Nationalism and of fundamentalism. And he speaks on behalf of forces that are loose in Europe and in other places in the world. If we just write this off as the statements of a madman we will suffer for this in the long term because we will not have listened to what he said. He’s warning us.”

“I think [to fail to listen to him because he is ‘a mad man trying to justify horrific actions’] would be something we would come to regret very much indeed.”

“One of the key points that we learned from Breivik last year was that here is a man who has refused to engage in debate. Part of his counter accusations now is that nobody has given him, and his body of opinion, a platform in which to have discussions.”

“What is so [is to] important to engage fundamentalism is to have open debate. This is not [to] justify his actions in any way but debate is a crucial aspect of democracy — all opinions should be represented.”

There are all sorts of justifications for refusing to engage in debate. Most of them, in my view, pretty weak.