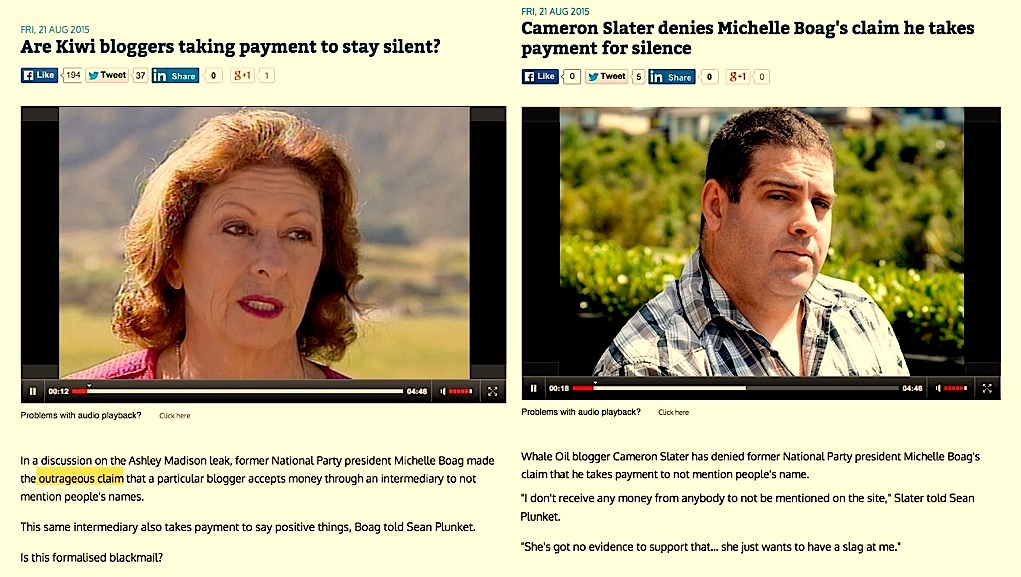 Yesterday Auckland-based newstalk station RadioLIVE did its best to quickly smother a small (metaphorical) explosion which briefly endangered its carefully-cultivated and maintained state of peace with political and commercial attack blogger Cameron Slater.

At first blush, Sean Plunket seemed excited about that idea, spluttering to Ms Boag that such an arrangement was “tantamount to a kind of formalised blackmail … like a protection racket” and gushing, “You can hijack my show with information like that any time you please”.
Listen:

But it wasn’t long before those with cooler heads at RadioLIVE stirred, and the excitement died down, to be replaced with something more familiar to the station’s loyal listeners.

Ms Boag’s assertions were labelled “the outrageous claim” on the RadioLIVE website, and Plunket telephoned Slater Jnr and gave him a fairly challenge-free opportunity to smear Michelle Boag in response. (‘Free hits’ kids used to call that in the playground when I was growing up.)

This was all in the interests of ‘balance’, I’m sure you realise without me saying it. Plunket gave Slater Jnr a chance to “try to sort this out”. Why, it was almost as if Slater Jnr’s public denials are actually worth a damn.

The two audio clips are available at the RadioLIVE website Boag here and Slater Jnr here, but I’ve archived them here, since interesting items have a habit of quietly slipping off Mediaworks websites now and then.

Pay particular attention to Slater Jnr’s slippery answer to the straight question: “Does Carrick Graham in any way work for you as a marketer or an intermediary?” I’ll have more to say about that in due course.

So, having given Cameron Slater a gentle foot rub, Plunket gave his guest one more opportunity to smear Boag saying: “I would hate to besmirch your reputation further by paying this any more attention, this scurrilous accusation” as a clearly delighted (and more important from Radio LIVE’s point of view, pacified) Slater Jnr purred in appreciation — and stuck the boot into Michelle Boag again.

And then, to end the segment, Plunket gave his listeners a glimpse into RadioLIVE’s mindset in this nicely encapsulated soundbite, which could almost have been scripted with a lawsuit/BSA complaint in mind:

How intriguing that a Talkback Radio station should seek to shut down discussion like this: “I don’t think anything more needs to be said.”
Is that normal?

UPDATE: Someone has pointed out that RadioLIVE’s Mark Sainsbury gave Cameron Slater another opportunity to smear and demean Michelle Boag — unchallenged — on air later that day. So, from Plunket’s “Nothing more needs to be said”, to Sainsbury’s “Let’s give Slater Jnr another crack at the woman he hates”.
Can’t be too generous with the appeasement, eh?

You may also be interested in: Is Colin Craig ‘defaming’ Cameron Slater and his commercial attack website?