« A sad, but pithy assessment of John Key by Rod Oram
Oh. A certain Food & Grocery Council member will be HATING this graphic. » 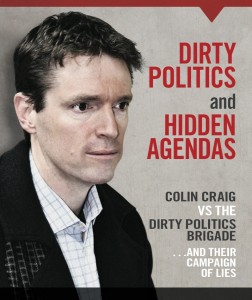 So, Colin Craig is pushing back against the protracted Dirty Politics-esque smear campaign that Cameron Slater and some of his muppets carried out against him, presumably on behalf of shadowy ‘clients’.

Slater Jnr may deny it (he is, after all a proven liar who “talks big up from nothing”),  or he may say his ‘clients’  were, like Mark Hotchin, “paying for the strategy, not paying for the [attack] posts” … or he may be doing it as a hobby. Right.

When Craig released this 12 page booklet (PDF 3MB) at a press conference on Friday I had thought the design was obviously intended for wider circulation — but the idea that it would be distributed as a commercial letterbox drop did not occur to me. Full marks for thinking big.

The booklet itself is worth a read. Some of it is more instantly plausible than other bits, but anyone familiar with Simon Lusk’s puppetry and use of his sleazy pet Slater Jnr to unfairly and histrionically smear targets for money would recognise plenty.

Jordan Williams in the Luigi Wewege ‘love rat’ role I found very easy to believe, possibly because of my previously expressed (negative) estimation of that low-rent young man’s morals and attitudes towards women. An “attack dossier” shown to people at secret private meetings accusing Colin Craig of sexual harassment sounds right up Jordan’s alley, if you’ll pardon the expression. But it might all be a misunderstanding, eh? I think I read a quote where Williams said he had nothing to fear from Colin Craig’s lawsuit. Hmm.

Is Colin Craig entitled to defend his reputation?

Some uncharitable people treat Colin Craig as if he has no right to be taken seriously just because he’s a fringe politician. Yeah, he’s a flake, with an awkward manner and some anachronistic attitudes, but I think he’s got the right to defend his reputation from attack — especially from such nasty, unbalanced vitriolic attacks — and a Hidden Agenda™.

Also: Certain people within the Conservative Party ranks (or who have just departed from them) have clearly been played like a cheap violin, it seems to me. For what purpose? — and for whose purposes, do you think?

One theory is that Simon Lusk and the boy wonder were engaged to destabilise Colin Craig’s leadership, in a ‘stealing underpants’ plan to take over the Conservative Party machine as a vehicle for some other far right candidate. Garth McVicar and Bob McCroskie’s names are mentioned.

But then, the theory goes, because unlike the sensible Rodney Hide, Colin Craig didn’t ‘exit, stage left’ with dignity before the oily one deployed the sleaze, out came Slater Jnr’s ‘heat’ — the protracted ‘death by a thousand cuts’ that he keeps rabbiting on about ominously. The attacks, and Craig’s reaction raised the temperature so much that the aforementioned heir-apparent/benefactor/(paymaster?) got cold feet, the story goes … and the ‘strategy’, along with ‘the plan’ swirled quietly down the toilet. That’s a theory I’ve heard. Does that seem plausible? Well, yeah, partly. Dunno.

So who is defaming whom?

Craig’s lawyers wrote to Slater Jnr on Friday (PDF 600KB), apparently, detailing a few of the hate blogger’s [alleged] defamations but also recognising they were dealing with someone who displays the discernment of a drunk cage fighter, and so will proceed to filing their claim. We’ll see. One of my rules as a journalist is to report the filing of a legal action, and not be too impressed with the threats of one.

Like the white trash that they are, Slater Jnr and his wife and their deputy dog Pete Belt are already threatening to ‘expose’ all sorts of other embarrassing information and allegations about Colin Craig in ‘open court’. Oh yeah? Like, stuff they’ve held back? Why? Because it was too unseemly? Do they really think everyone else is an idiot?

How that looks to me: that is the sort of bullying intimidatory legend-in-their-own-lunchbox behaviour one has come to expect from these reality-challenged individuals. A lot of Slater Jnr’s, Juana’s and Pete Belt’s statements seem to me to be mere marketing — intended for consumption by the gullible ‘whale army’ — you know, the people who buy Slater Jnr’s branded sun hats, T-Shirts (and ski masks?)

Do not adjust your set. This might get interesting.