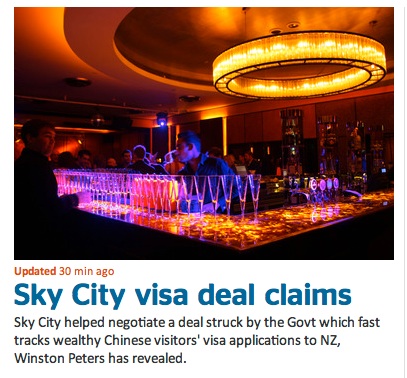 But Mr Peters again had Mr Guy on the defensive in Parliament this afternoon when he asked whether Sky City Casino had been pushing for the scheme for years.

Mr Peters said Sky City’s wealthy Chinese “high rollers” already operated under the rules which Mr Guy yesterday said would take effect later this month, “which means that a casino and a communist government airline have under his deal with them, now aquired privileges for their customers not available to any other group of people anywhere else in the world”.

Mr Guy said he did not agree with Mr Peters’ “stupid assertions”.

However Mr Peters tabled an article which appeared in online version of New Zealand TravelTrade magazine in which Sky City’s president of international business Ejaaz Dean was reported as saying the casino was “working closely with China Southern Airlines to bring VIP gamblers into Auckland seamlessly” and in which he “confirmed the casino was in talks to make the visa process easier“.

Boy, that’s some influence. I wonder who SkyCity’s lobbyists are? Oh, that’s right … from Adam Dudding’s 2011 article Inside political lobbying

When the government revealed last month that it would soften gambling laws in exchange for SkyCity building a $350 million conference centre in Auckland, lobbyists were presumed to have brokered deals behind closed doors – it turns out dialogue between SkyCity and John Key on the issue was under way as early as November, 2009.

SkyCity chairman Rod McGeoch said the access was enabling the company to change the way it was seen by “key influencers”. …

Mr McGeoch told shareholders at the annual meeting on October 30, 2009, the company’s “relationships” with the Government were “as good as they have ever been”.

He said his roles in business leadership groups had created opportunities to meet “high ranking officials and Cabinet ministers”.