« My Side versus The Other Side. (Just beautiful)
Fear of ‘the other’ exemplified » 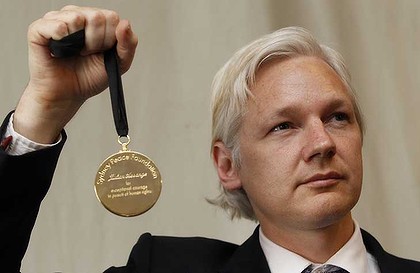 Julian Assange with the Sydney Peace Prize he received in May 2011. Photo: Reuters

I’m completing the design for a book by a friend of mine at present, Slouching Towards Bethlehem. It’s a fascinating study of the rise of the antichrists — note the plural. Graeme’s definition of ‘antichrist’ differs considerably from The Omen/Damien/666 stuff of the 1970s movies, and encompasses the repeated incidences of elevation of heads of state as ‘deities’ throughout human history. And the problems that causes.

As we worked on the book yesterday afternoon, I was struck again by how intelligent observers in the past have ignored or justified evil or repression in the name of an ideology they support — only later (in some cases) realising their beliefs and wishful thinking led them to be duped, played for fools and used in deadly propaganda. Here’s an extract …

Understanding this demonic seduction to emperor-worship helps explain the phenomenon of what Lenin and Stalin were said to have called their “useful idiots”: prominent aristocrats, writers, intellectuals, philosophers and artists who would willingly justify the regime’s murderous activities. In a BBC radio documentary of this name broadcast in July 2010, Doris Lessing, winner of the Nobel Prize for Literature in 2007, admitted her role as such, along with George Bernard Shaw, H.G. Wells, Jean-Paul Sartre, André Malraux, famed black singer Paul Robeson, and Pulitzer Prize winning journalist, Walter Duranty. Duranty was the Moscow correspondent for The New York Times from 1922 to 1936 and publicly denounced fellow correspondents Gareth Jones and Malcolm Muggeridge of the Manchester Guardian for daring to write of the Soviet government’s causing the Ukrainian famine. Muggeridge had become disillusioned as a socialist during his time in Russia and, as incredible as this may seem, he became an outcast among English intellectuals and journalists for his dispatches and books about what he had seen.

It struck me because I had a (very mild) disagreement on Twitter with three people I respect over the treatment of Julian Assange. I’d pointed to an article by Glenn Greenwald The bizarre, unhealthy, blinding media contempt for Julian Assange which sums up and addresses the unease I’ve long felt about the way the establishment media — including Assange’s ertswhile collaborators at the New York Times and The Guardian — have smeared and pilloried him. They’ve portrayed him as a paranoid oddball and a nutcase … and as if allegations of sexual violence had been already proved. (We’ve discussed that here at The Paepae before — see the Assange tag.)

I’m NOT calling my Twitter buddies idiots. Just the opposite. I like and respect them. But I was struck, and said so, by their potent sense that Assange was somehow already guilty … of being ‘an awful person’ … based on his resistance to turning himself over to what looks like a compromised ‘justice’ system investigating (in my view dodgy) allegations of sexual violence.

Today in The Guardian, there’s an article by Katrin Axelsson and Lisa Longstaff We are Women Against Rape but we do not want Julian Assange extradited in which they say ‘For decades we have campaigned to get rapists caught, charged and convicted. But the pursuit of Assange is political.’

When Julian Assange was first arrested, we were struck by the unusual zeal with which he was being pursued for rape allegations.
It seems even clearer now, that the allegations against him are a smokescreen behind which a number of governments are trying to clamp down on WikiLeaks for having audaciously revealed to the public their secret planning of wars and occupations with their attendant rape, murder and destruction.
Justice for an accused rapist does not deny justice for his accusers. But in this case justice is being denied both to accusers and accused. The judicial process has been corrupted. …

Yeah, that’s my point too. I pointed to the the extraordinary way his ‘charges’ have been progressed here in February 2011, and the stink has only gotten worse.

But it’s easy for someone with a different view to sniffily suggest ‘Assange-hats’ like me are ‘downgrading’ rape allegations (close family and personal friends of mine and been hurt and affected by rape, so please get away with such thin insults). Or we’re somehow tinfoil hat conspiracists and spy fiction fabulists. Such critics could perhaps read a bit more about how the ‘intelligence community’ works.

Beside a deep and abiding sense of distrust about the exceptional way Assange is being treated, the issue that catches in my throat in this case is the awful clobbering machine much of the media has become. The baying after and bashing of Assange, as Greenwald discusses (and which I have noted before) is ‘creepy’ — and it predates the rape allegations

… the personalized nature of this contempt from self-styled sober journalists often borders on the creepy (when it’s not wildly transgressing that border).

Remember Assange being described as a ‘lothario‘ and ‘paranoid‘? Who else would they so casually demonise and denigrate?

It is difficult to think of anyone this side of Saddam Hussein who triggers this level of personalized, deeply ingrained hatred from establishment journalists. Few who spew this vitriol would dare speak with the type of personalized scorn toward, say, George Bush or Tony Blair – who actually launched an aggressive war that resulted in the deaths of at least 100,000 innocent people and kidnapped people from around the globe with no due process and sent them to be tortured. The reaction Assange inspires among establishment media figures is really sui generis.

It is vital to note, as was just demonstrated, that this media contempt long pre-dates, and exists wholly independent of, the controversy surrounding the sex assault allegations in Sweden, and certainly long pre-dates his seeking of asylum from Ecuador. Indeed, given that he has not been convicted of anything, to assume Assange’s guilt would be reprehensible – every bit as reprehensible as concluding that the allegations are a CIA ruse or that the complainants’ allegations should be dismissed as frivolous or inherently untrustworthy.

The smear against Assange is so comprehensive, and sung in such a chorus, that to those of us not caught up in the fever, it almost has a life of its own, drowning out liberal or conservative unease about the appearance of fixated corruption of due process (I know that’s contentious) applying to his case.

Britain, with the colonial-esque bullying and sabre-rattling threat of ‘storming the embassy’ … good god, does anyone remember the 1984 Libyan London embassy incident where policewoman Yvonne Fletcher was shot by someone inside the embassy … Did British authorities storm the embassy? (No, Metropolitan Police surrounded it for 11 days, then allowed the diplomats to leave and the UK expelled them. see Wikipedia)

The lack of proportionality in the Assange case is staggering. There is clearly another agenda.

I don’t say any of this to diminish rape as a crime. That’s not the argument. To behave and agitate as if it is, risks acting as a ‘useful idiot’.

Or so it seems to me.