Fear of ‘the other’ exemplified

via Andrew Sullivan, read this huge read at The Atlantic. Wow. 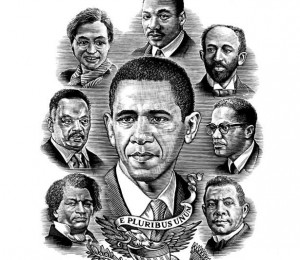 image: Bill Sanderson via The Atlantic

Fear of a Black President

As a candidate, Barack Obama said we needed to reckon with race and with America’s original sin, slavery. But as our first black president, he has avoided mention of race almost entirely. In having to be “twice as good” and “half as black,” Obama reveals the false promise and double standard of integration.

The whole article is powerful, but this got me:

Racism is not merely a simplistic hatred. It is, more often, broad sympathy toward some and broader skepticism toward others. Black America ever lives under that skeptical eye. Hence the old admonishments to be “twice as good.”

… Obama’s first term has coincided with a strategy of massive resistance on the part of his Republican opposition in the House, and a record number of filibuster threats in the Senate. It would be nice if this were merely a reaction to Obama’s politics or his policies—if this resistance truly were, as it is generally described, merely one more sign of our growing “polarization” as a nation. But the greatest abiding challenge to Obama’s national political standing has always rested on the existential fact that if he had a son, he’d look like Trayvon Martin. As a candidate, Barack Obama understood this.

“The thing is, a black man can’t be president in America, given the racial aversion and history that’s still out there,” Cornell Belcher, a pollster for Obama, told the journalist Gwen Ifill after the 2008 election. “However, an extraordinary, gifted, and talented young man who happens to be black can be president.”

Belcher’s formulation grants the power of anti-black racism, and proposes to defeat it by not acknowledging it. His is the perfect statement of the Obama era, a time marked by a revolution that must never announce itself, by a democracy that must never acknowledge the weight of race, even while being shaped by it. Barack Obama governs a nation enlightened enough to send an African American to the White House, but not enlightened enough to accept a black man as its president.

While Beck and Limbaugh have chosen direct racial assault, others choose simply to deny that a black president actually exists. One in four Americans (and more than half of all Republicans) believe Obama was not born in this country, and thus is an illegitimate president. More than a dozen state legislatures have introduced “birther bills” demanding proof of Obama’s citizenship as a condition for putting him on the 2012 ballot. Eighteen percent of Republicans believe Obama to be a Muslim. The goal of all this is to delegitimize Obama’s presidency. If Obama is not truly American, then America has still never had a black president.

PS I see this thought: “Racism is not merely a simplistic hatred. It is, more often, broad sympathy toward some and broader skepticism toward others” applied in politics in this country all the time. I call it ‘sectarianism’ or ‘extreme partisanship’ in other contexts, and refer to it here from time to time. It’s just as much bigotry as racism … which we also indulge in New Zealand.