« Earthquake engineering in action
The escape of exnzpat, Part 12 »

In a cold, lonely world, it’s good to know there are some things you can rely on. Like the visceral partisan loyalty of National Party attack blogger Cameron Slater.

Cameron demonstrates his earnest support for his pick for next leader of the National Party: Papakura MP Judith Collins. Strictly speaking, Ms Collins is only his pick for leader as an interim measure before the ascendancy he predicts for Jami-Lee Ross — as revealed here: Is John Key ‘hugging a corpse’? Does he have a choice? 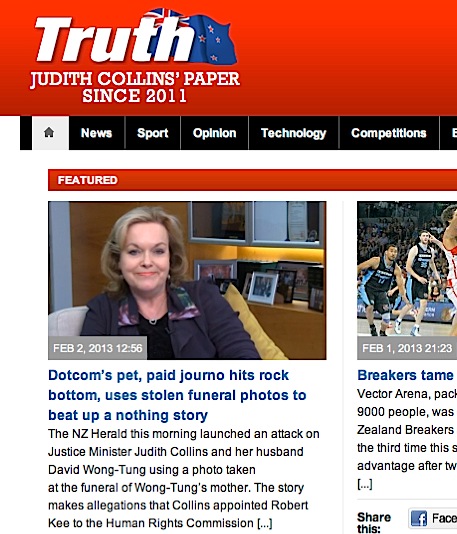 Is Truth not much more than a partisan organ?

Anyway, for now, Cameron seems committed to #spinningforJudith, as one wag put it in a hashtag.

Cameron was virtually alone as I recall, in going to bat for Ms Collins over the scurrilous suggestions by today’s fish and chip paper the NZ Herald that her appointment of a friend of her husband’s to a state sector role dealing with human rights proceedings was questionable. As the weekend NZ Herald reported (Judith Collins picked husband’s friend — Sat 2/2/13), Ms Collins had personally nominated Robert Kee, then overruled her officials’ advice to appoint someone else who actually had, you know, high level experience of dealing with human rights issues.

Focusing on the issues that matter, Cameron Slater swung into damage control and by a miracle, against the odds, where others had failed, managed to get an interview with Ms Collins that very same Saturday morning … then someone at Truth promptly churned out a ‘news story’ — not focussed on the questionable appointment process but — about the photo the NZ Herald used to illustrate their story.

Flush with the power of his role atop a nationally-distrubuted Hookers directory newspaper (cough), Cameron vented partisan outrage against the journalist and the newspaper which had embarrassed his princess, describing them in unflattering terms and suggesting the reporter was somehow corrupt. (Rich, huh?)

Here we are: another day, another controversial appointment. Ms Collins faces public criticism for her surprising appointment of former squash champion Dame Susan Devoy as Race Relations Commissioner. I’ve always liked her but Dame Susan, critics say, appears under-qualified for the role; she seems to underestimate its complexity; and she is on the record as having made some less-than-inspiring comments about race relations in New Zealand.

But I was struck by the (to me) unusual sight of a cabinet minister doing her bit on Twitter to drive traffic to her lapdog’s distorted distraction machine. There’s not much subtle about these two. 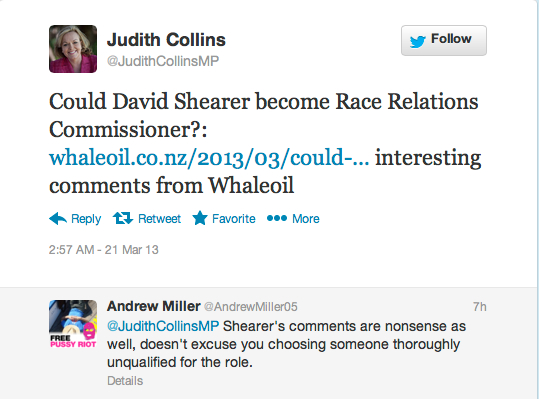 You scratch my back and I’ll scratch yours?

It’s touching that Judith Collins can rely on Cameron Slater to promote her best interests (for now), to defend her reputation and to attack her critics.