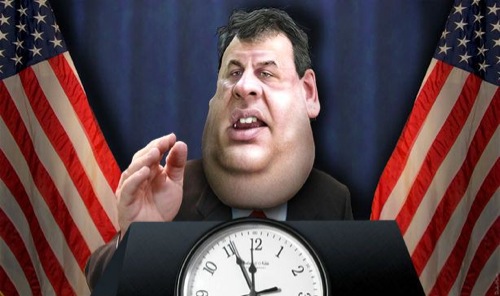 This line from an Esquire Politics Blog by Scott Raab, Why Christie Now Has Nothing to Lose, (and the Chris Christie Countdown Clock image) show how personally punishing US political media commentary can be. That’s its nature at times — a whirling clobbering machine, standing ready to attach clichéd labels.

As for Christie, he’s a dead man waddling, with nothing left to lose.

I’m finding the whole ‘vetting’ campaign Chris Christie, as the presumptive GOP presidential candidate, is undergoing in the US media fascinating.

New Jersey has earned a reputation as a corrupt political state. Mr Christie, elevated by voters to the Governor’s office after an extraordinarily high profile, tightly PR-managed term as US Attorney and a well-funded election campaign … which itself followed and coincided with extended publicity about crooked politicians, bribery and corruption around property development. (You know the film American Hustle was based on the Abscam scandal … which actually happened in New Jersey, right?)

Abscam—sometimes written ABSCAM—was a Federal Bureau of Investigation (FBI) sting operation run from the Bureau’s Hauppauge, Long Island, office in the late 1970s and early ’80s. The operation initially targeted trafficking in stolen property but was converted to a public corruption investigation. The FBI, aided by a convicted con-man, videotaped politicians as they were offered bribes by a fictional Middle Eastern sheik in return for various political favors.
The investigation ultimately led to the conviction of a United States Senator, six members of the United States House of Representatives, one member of the New Jersey State Senate, members of the Philadelphia City Council, the Mayor of Camden, New Jersey, and an inspector for the United States Immigration and Naturalization Service.

At the very least Mr Christie seems guilty of deeply-indulged cronyism and a … erm … misuse of the political appointment process — always such a temptation for the arrogant even on these fair shores.*

These latest developments in the New Jersey case, with the appearance of Mr Christie’s ‘boy’ David Wildstein (not just a political appointment, but an appointment to a job actually created for him!) apparently, through his lawyer readying himself to reveal a smoking gun: a paper trail showing Mr Christie’s two hour long explanation for the George Washington Bridge closure scandal — what he knew and when he knew it —  was misleading.

It’s not looking like a story that is going away any time soon. 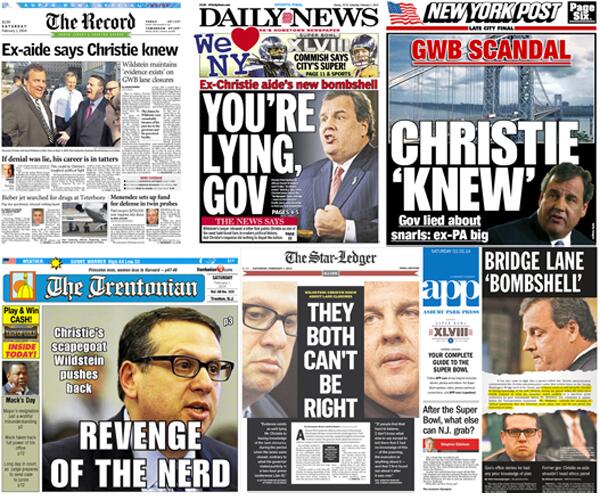 Rachel Maddow’s show (which I’ve been watching on podcasts) has gone after Chris Christie and his cronyism, obfuscation and bully-boy tactics hard.

I would watch a mainstream media current affairs show in this country that went after Establishment power in that way — especially in election year.

* A couple of local examples of controversial government appointments: here and here. We discussed the issue peripherally here at The Paepae: Judith Collins promotes her tame attack blogger.