Is John Key ‘hugging a corpse’? Does he have a choice?

I remember reading it a while back in relation to political management. A quick web search popped it up (in this part of the world) as one of National Party blogger Cameron Slater’s 13 ‘Rules of politics and guidelines for politicians’, thoughtfully transcribed by reporter Pete Bailey from a 2011 presentation at the Half Moon Bay Rotary club. (PDF 500kb)*

If you hug a corpse you will end up smelling like it. Once they are passed (sic) their used buy (sic) date let them go or thery (sic) will be pushed out.

And yet we have the spectacle of … 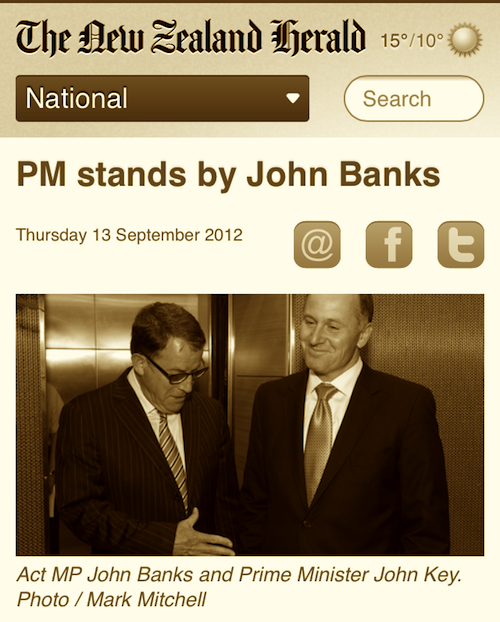 Prime Minister John Key is standing by Cabinet colleague John Banks.
Mr Key’s support followed revelations in newly-released police documents that Mr Banks’ campaign team for the 2010 Auckland mayoralty drew up a list of 10 rich donors to target for $25,000 each.

According to the documents, internet tycoon Kim Dotcom told police Mr Banks had asked him for two payments of that exact amount so he would not have to declare where they came from.

Today Mr Key said: “Nothing has changed when it comes to (our earlier) position. I haven’t read the full (police) report, I’ve seen what’s in the media … Look, this is a politically motivated attack from Labour and really where they should have put their political energy is changing the law. It is very, very broad, unworkable law and that’s why the Government is changing it now.”
Asked if he still had confidence in Mr Banks, he said: “Yes absolutely.”
The Prime Minister said Mr Banks hadn’t broken the law and his position on the matter hadn’t changed.
He said he did not plan to read the police file and it was a matter for Mr Banks whether he released a statement made to police. — NZ Herald

Does that sound like ‘hugging a corpse’ to you? With a one seat majority in Parliament, does John Key have a choice?

Who would have thought a simple cup of tea could lead to so much argy-bargy?

Also: I note that Mr Key doesn’t plan to read the police report. And why should he? Mr Banks has already declared he doesn’t read what he signs. Perhaps the Prime Minister has adopted the same practice?

Yeah, I’d kinda worked that out from Cameron’s cheerleading.