iPad? Yeah. OK, probably. Why not? 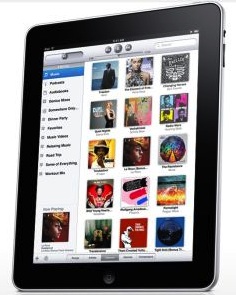 Yes, I’ll probably get one of these. It looks useful, and some of the applications seem like an improvement. Apple does lead the world in industrial design (the ‘cool’ factor), and this shows it again. An e-book reader should have a high quality colour screen, in my opinion.

Is it a ‘game-changer’, as pundits are saying?

Yes, I think so, probably — with the iTunes, App Store and now iBooks store … yes.
I expect to see subscriptions to Murdoch’s papers and a bunch of other online media. Apple’s gravitational pull (the ‘goldrush’ they talk about) will make them an attractive ‘channel’.

The future of online distribution is (almost) here.

But the iPad isn’t just about hardware. Even if somebody duplicated it, they’s still need a software ecosystem.

Apple has not only demonstrated that it can think up and create phenomenal apps of its own, but has also demonstrated impressive stuff from a few iPhone developers who only had a few weeks to whip something up. Once Apple’s army of iPhone developers hit their stride, the array of apps available for the iPhone will look rudimentary in comparison. The iPad truly supports real desktop style apps with even more sophisticated multitouch input that the iPhone.

Even with all their hardware partners, Google’s Android and Microsoft’s Windows Mobile haven’t been able to attract the same kind of attention from developers or software buying users. Apple’s new iPad is unique on many levels, and demonstrates a formidable new challenger in a the formerly lackluster tablet computer market. For competitors to match it, they’ll need to catch up not just in hardware but also in media distribution, in developer tools, in customer base, and in raw component technology, and all at a tremendously aggressive price.

—
As for the design choices, Adam over at lonelysandwich has a little to say about the screen aspect ratio which made me laugh…

As you can see above, an iPad screen in portrait is equivalent in aspect ratio to two iPhone screens stacked in landscape mode. What does this mean? Put two and two together, man. Do I have to spell it out for you?

UPDATE: Fine. Apparently, I have to spoon-feed you people. It’s about the inherent duality of man and his finite and structured capacity for self-love. Bicameral duplex onanism and okay I got nothing.