Nice writing on a smear campaign 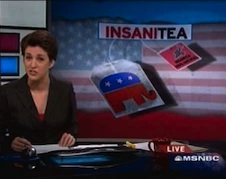 Rachel Maddow in flight on MSNBC

MSNBC took out a full-page ad in Friday’s Boston Globe for a ‘letter’ from their talk show host Rachel Maddow to her fellow Massachusetts citizens. This was a response to Senator Scott Brown’s claims (in an effort to raise money, apparently) that she is planning a run against him in 2012.

Her letter contains some nice touches (“It’s just not true. Honestly. I swear. No, really.”)
Read it for yourself…

Hi, I’m Rachel Maddow. I host a TV show on MSNBC. I also live in Western Massachusetts, in the beautiful hilltowns of Hampshire County.

This week, our new U.S. Senator, Scott Brown, sent a fundraising letter that says I’m running against him for Senate when he’s up for re-election in 2012.

Senator Brown never even tried to find out if it was true, before using the made-up threat of me running against him, to try to scare donors into giving him more money. He sent the letter all around the country, to the out-of-state conservative activists who provided so much of the funding for his successful Senate campaign.

Do you remember when Mitt Romney ran for President after being our Governor and he went around the country insulting Massachusetts, talking about what an awful state we are? To have our new Senator raising money around the country by saying how terrible one of his Massachusetts constituents is, kind of feels the same way to me.

It’s standard now for conservatives to invent scary fake threats to run against — things like the made-up ‘death panels’ in health reform, or the fake controversy about the president’s birth certificate. Senator Scott Brown’s only been in DC seven weeks, but he already seems to be fitting right in with how conservatives operate there.

I’m running this ad not because I’m running against Scott Brown — I’m not, he made that up — but because he’s the Senator for all of us, and maybe this will make him think twice the next time he wants to smear one of his constituents to raise money out-of-state.

My show airs at 9PM Eastern in Massachusetts on MSNBC. So far, Scott Brown refuses to come on. Maybe he’ll change his mind — I hope he does.

The tone is good, and the dredging up of previous lies (things ‘made-up’) and smear campaigns works. It’s well written and in a likeable ‘voice’. Here’s how it looked… 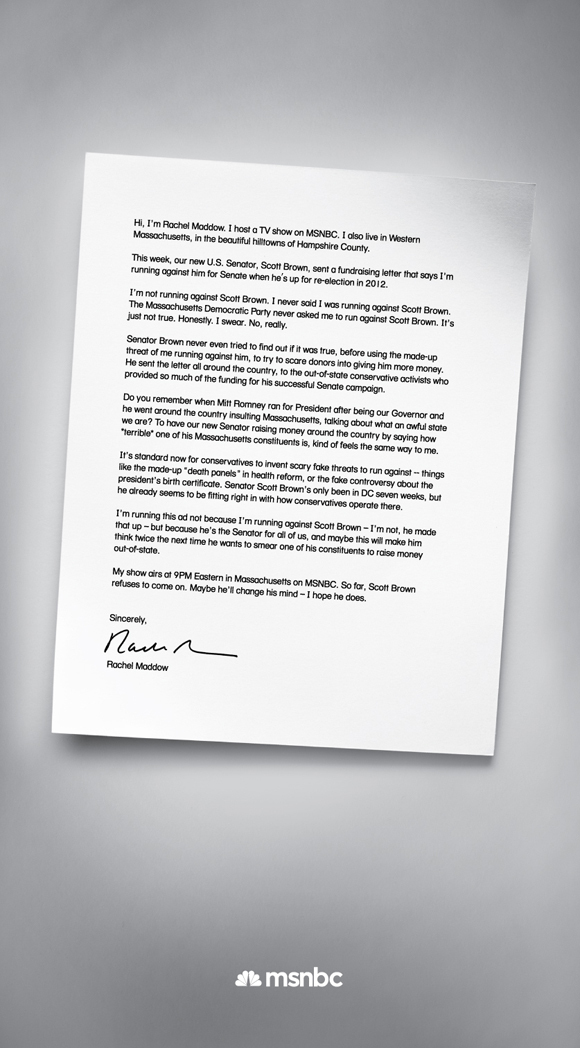 Any excuse to plug the programme times!