« Oh.
Uncovering the Scientology cult and its practices » 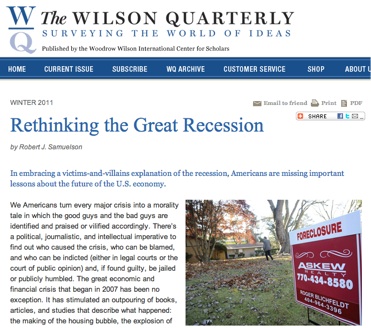 Boom-bust, not not so much good, bad. (Wilson Quarterly - click)

I’ve just read a fantastic article Rethinking the Great Recession by Robert J. Samuelson in the The Wilson Quarterly. Wow.

Instead of hand-wringing and wailing about ‘What’s happening to us?’ Samuelson’s plausible analysis points to a widespread forgetting of the boom-bust lessons of history…

The great economic and financial crisis that began in 2007 … has stimulated an outpouring of books, articles, and studies that describe what happened: the making of the housing bubble, the explosion of complex mortgage-backed securities, the ethical and legal shortcuts used to justify dubious but profitable behavior. This extended inquest has produced a long list of possible villains: greedy mortgage brokers and investment bankers, inept government regulators, naive economists, self-serving politicians. What it hasn’t done is explain why all this happened.

The story has been all about crime and punishment when it should have been about boom and bust. The boom did not begin with the rise of home prices, as is usually asserted. It began instead with the suppression of double-digit inflation in the early 1980s, an event that unleashed a quarter-century of what seemed to be steady and dependable prosperity. …. As inflation fell, interest rates followed. The stock market soared. From 1979 to 1999, stock values rose 14-fold.

Housing prices climbed, though less spectacularly. Enriched, Americans borrowed and spent more. But what started as a justifiable response to good economic news—lower inflation—slowly evolved into corrupting overconfidence, the catalyst for the reckless borrowing, overspending, financial speculation, and regulatory lapses that caused the bust.

In some ways, the boom-bust story is both more innocent and more disturbing than the standard explanations of blundering and wrongdoing. It does not excuse the financial excesses, policy mistakes, economic miscalculations, deceits, and crimes that contributed to the collapse. But it does provide a broader explanation and a context.

People were conditioned by a quarter-century of good economic times to believe that we had moved into a new era of reliable economic growth. Homeowners, investors, bankers, and economists all suspended disbelief. Their heady assumptions fostered a get-rich-quick climate in which wishful thinking, exploitation, and illegality flourished. People took shortcuts and thought they would get away with them. In this sense, the story is more understandable and innocent than the standard tale of calculated greed and dishonesty.

But the story is also more disturbing in that it batters our faith that modern economics—whether of the Left or Right—can protect us against great instability and insecurity. The financial panic and subsequent Great Recession have demonstrated that the advances in economic management and financial understanding that supposedly protected us from violent business cycles—ruling out another Great Depression—were oversold, exposing us to larger economic reversals than we thought possible. It’s true that we’ve so far avoided another depression, but it was a close call, and the fact that all the standard weapons (low interest rates, huge government budget deficits) have already been deployed leaves open the disquieting question of what would happen if the economic system again lurched violently into reverse. The economic theorems and tools that we thought could forewarn and protect us are more primitive than we imagined. We have not traveled so far from the panic-prone economies of 1857, 1893, and 1907 as we supposed.

Yeah, I heard a lot of that stuff about entering ‘a new era of reliable economic growth’…  and that the banks would never indulge in the same bad behaviour that accelerated busts in the past (ahem). I’d published Olly Newland’s book The Day the Bubble Bursts, whose main message was ‘What goes up must come down’ (more to it than that, clearly, but you get the picture: Economic cycles are here to stay. Wake up and take these steps tp keep yourself safe.)

In response, quite a few people trotted out what I consider to be the most dangerous words in the English language:

You can download Samuelson’s full article (PDF 148 KB) here. Or read it online at The Wilson Quarterly. It’s very good.