« All that glitters is not gold
With one swift blow, Kate knocked the wind out of the duplicitous toady … »

I’ve met the bright guy quoted in this Financial Post story Don’t be tempted by US firesale. It seems he is quoted warning Canadians about buying the wrong type of distressed US property in an article largely warning not to do it at all. 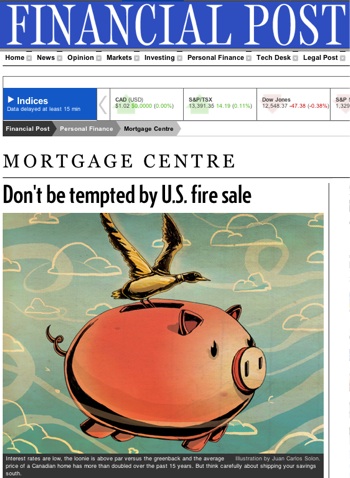 Speaking from experience, Philip McKernan says markets DO turn ... a dream purchase could end up being a nightmare. He's right.

It may sound like a dream come true, getting a U.S. property, but it could become your worst nightmare, says Philip McKernan, author of ‘South of 49’ and ‘Fire Sale: How To Buy U.S. Foreclosures’.

“The equity release is a scary prospect,” says the Irish-born Mr. McKernan, who now lives in Vancouver but witnessed a similar phenomenon in his homeland. “They called it the Celtic tiger. People released vast amount of equity from their home, including myself. I believed I had an ATM in the back of my house.”

He leverage the equity in a home on the west coast of Ireland to buy two properties in Finland and the next thing he knew the value of his principal residence had shrunk dramatically and his overseas properties were just holding their own.

“My purchases were driven by greed and ego,” says Mr. McKernan, adding it’s the same for many Canadians this time. “Prices came off [in Ireland] and we were left with a piece of real estate that had negative equity and we had to keep paying it off.”

He’s not against investing in the U.S. but a vacation property you are going to visit a couple of times of year and try to rent out the rest of the time is going to give you negative cash flow. He’d rather see people do some research and buy a $50,000 property in Michigan that generates $600 of rent a month.

“If you are sitting around a dinner party in Toronto, you don’t want to talk about your three-bedroom house in a dodgy area that has positive cash flow. You want to talk about the golf course and the lakes. It’s not sexy but they are choosing sexy over security,” says the author.

I guess if Philip McKernan is part of a business operation funneling ‘investors’ into US foreclosures (judging his comments and his book titles), then, well, his message might be a little equivocal or smack ever-so-slightly of doublespeak.

I could be missing something, but what’s that saying about a rising tide lifts all boats? So if the tide falls (as now expected?) …

I guess it depends on your time horizon (cough, splutter).

Whatevs, I’m with Neil Jenman on this as I said in It’s raining Memphis! And Olly Newland: How To Go Broke by Buying in the USA. Judging by the operation and some of the operators, in my (admittedly negative) view there’s a better-than-even chance you’re being fleeced … somewhere in the food chain.